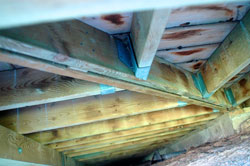 Success is rarely as simple as it looks, and fastening a deck to your house is one of those deceptive situations. Encouraging rot and deterioration of your house wall is a distinct reality if you don’t anchor your deck properly, and long-term success depends on simple, often overlooked details. Even if you hire a professional deck builder, don’t assume they’ll work diligently. Understand and ask for confirmation that proper installation techniques will be followed.

The fundamental question is whether to fasten your deck to the wall of your house at all. You could build a self-contained deck foundation on its own; whether or not this makes sense depends mostly on the difficulty of anchoring the deck floor frame to the house correctly. Your decision hangs on two key factors:

When decks anchor to walls they’re supported by bolts spaced 12” to 16” apart, penetrating the edge of the deck floor frame and into some solid part of the house. If the proposed level of the deck lands somewhere on your basement foundation wall, then direct anchoring of the deck is a no-brainer. It’s safe, easy and fast. Install pressure-treated plywood spacers between the deck floor frame and the foundation wall to promote water drainage and prevent rot.

Things get more complicated if your deck floor aligns with a part of your house wall above the foundation, because simply bolting to what you see isn’t a viable option. Here’s why…

Why brick veneer is tricky

If you’re dealing with a brick veneer wall, for instance, you’ll need to resist the temptation to bolt your deck right to it. Bricks like these look solid but they’re only about 3 1/2” thick. They’re not made to support vertical loads, like deck floors, so don’t expect them to. Installing your deck floor against brick requires that you drill right through the masonry, then install lag bolts into the underlying wood frame. Be sure to fill the bolt holes with the best exterior caulking you can find before installing the bolts, then slather additional caulking around the bolt shanks before tightening them up all the way. You’ve got to keep water out. As you work, don’t tighten these bolts more than moderately, either. You don’t want to put too much side pressure on the brick veneer.

Why wood, aluminum and vinyl siding is tricky

If your deck floor height lines up with wood, aluminum or vinyl siding, things get more complicated. You’ll not only need to strip back the siding so the deck frame connects directly with the house wall sheathing underneath, but you’ll also have to make that connection waterproof. Mistakes here let water leak into the frame of your house, causing mold and rot that’ll only become apparent when it’s way too late. This is one situation where a completely separate deck foundation may be easier than fastening a deck to your house. Leaving your siding complete and uncut definitely offers advantages. 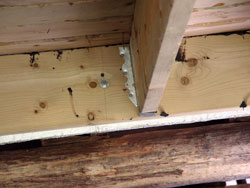 Regardless of how you anchor or support your deck frame, be sure to avoid a common time-bomb that’s often inadvertently built into decks. While it might seem that deck floor joists are adequately supported by nails driven through the edge of the deck floor frame, they’re not. Nails alone won’t support a floor safely over the long haul. You can start with nails during the earliest part of construction, but always install joist hangers before the deck boards go down. It’s the only trustworthy way of preventing a deck floor from collapsing unexpectedly years later. This does happen and people do get hurt.

Anchoring a deck properly is one of a handful of home improvement techniques that yield decades of additional deck life in exchange for a minimal investment of care and attention to detail. Diligence in this case is definitely one of the best DIY bargains going.