After more than two years of using one particular torch for all kinds of tough jobs – two of which ordinary propane torches can’t quite handle – I’m ready to say that the BernzOmatic Quickfire is the best in my book, and heat output is the main reason why.

There are two technical features that let this torch create a hotter flame:

Instead of a disposable tank of propane, Quickfire uses a gas called propylene. It costs about three times more – but this difference isn’t as significant as it sounds. A $10 cylinder of propylene solders at least half the copper water pipes in an entire house, so cost isn’t an issue. What does it matter that the same amount of propane costs $3? 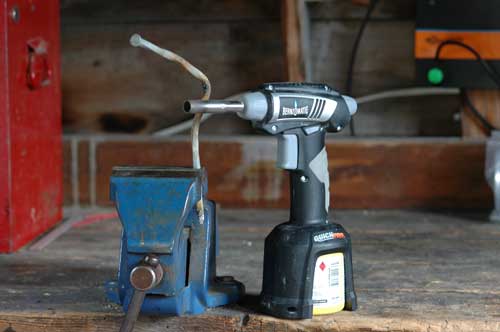 Propylene burns substantially hotter than propane all on its own, but this inherent heat advantage is also enhanced by a unique internal feature of this torch.

If you look down the tube that the flame comes out of, you’ll see four angled plates about two inches in from the end. These plates work together to impart a swirling action to the gas as it travels out of the torch and burns. Swirling means more complete combustion and hotter results that can be seen.

To compare torch performance in an empirical way, I measured the time it takes to heat one spot on a 12-inch-long steel spike enough to turn bright red and soft. After 4 minutes, my ordinary propane torch just barely heated the spike to a dull, red glow, allowing a small amount of slow bending under hand pressure. By contrast, the Quickfire heated the same spike to a bright red heat in just 45 seconds, softening the metal enough to make bending easy. This thing is way hotter than anything in its class. Take a look at a video I made and see for yourself.