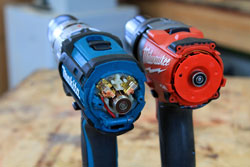 Every so often a sudden and significant advance happens in the world of tools, and now is one of those times. It’s called brushless motor technology, and it promises to instantly boost the performance of cordless tools across the board. All tool manufacturers are scrambling to bring brushless tools to market right now, and though most cordless tools on store shelves aren’t brushless yet, the new technology is worth looking for. To understand why, you need to understand what brushless is all about.

Most power tool motors include small, spring-loaded blocks of carbon hidden inside. These blocks are called brushes and they press against the revolving part of the motor, delivering electricity to it, while helping to create a revolving electrical field. It’s this revolving field inside the motor that makes it spin, and brushes have been an integral part of making this happen for more than a century. But as useful as they’ve been, brushes pose two major limitations:

Since brushes are designed to rub against revolving internal motor parts, they wear out in time. That’s just the way it is, and if brushes aren’t replaced in time, any tool motor will be ruined with continued use. Another problem with brushes is the energy they waste. Rubbing means friction and sparking, and this translates to less work done on each battery charge, all else being equal. 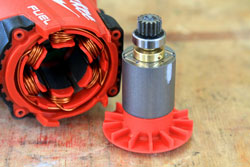 Brushless tools sidestep both the problem of wear and the problem of friction, and they do this with a much simpler design than older, brush-style motors. Compare the two kinds of tools side by side and you can easily see the difference, even if you don’t know anything about motors.

Instead of the mechanical system of brushes, springs and other parts that make electric motors spin, brushless tools use electronic circuitry to accomplish the same thing with far fewer moving parts. The results are some pretty tall claims from manufacturers for longer tool life and more work accomplished per charge. Brushless tool motors are supposed to last at least 1000% longer than brush-style motors before wearing out, and they’re supposed to deliver 50% more work from a given battery pack before charging is necessary. But claims are easy to make, and that’s why I decided to check out the reality myself.

To test brushless tool speed and endurance, I fitted an 18 volt Milwaukee FUEL 2604 brushless drill with the same kind of 9/16” drill bit I put into two new, comparable brush-style drills: the 20 volt DeWALT DCD989 and the 18 volt Makita BHP454. All three tools had fully charged 3.0 amp-hour batteries at the beginning of each test run. I measured how many 10-inch deep holes I could drill in the end of hard maple logs on a single charge, and how long it took to drill these holes. I repeated this test several times, averaging the production and speed numbers for accuracy. Bottom line: The Milwaukee brushless FUEL drilled ran 40% longer than the best competing brush drills on the same size battery, and 22% faster than the next best model. For a more detailed look at the internal technical differences between brush versus brushless, and to see exactly how all three drills compared with each other, check out the video I made of my Brushless Drill test.

The performance gains delivered by brushless tools come by reducing the amount of energy lost in the form of heat, and converting this energy instead into work. Besides the measurable differences in speed and endurance, you can also feel the difference in your hand while using the drills under load. While lots of heat was blasting out of the vents on the brush-style drills while drilling, the Milwaukee ran noticeably cooler – just as you’d expect.

I’ve been testing tools and writing about them for 20 years, and I’m always amazed at how tools keep getting better. There’s never been a time since the early 1990s that tools haven’t improved a lot from year to year, and the gains usually come in spurts. Brushless motor technology is the latest one, and it’s the kind of big deal that’ll make a big difference in the real world.