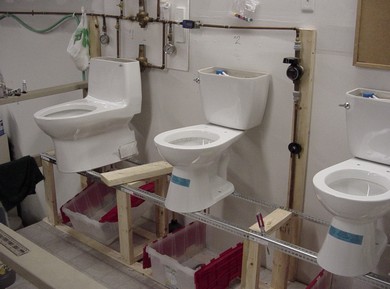 If you’ve ever lived with a water-saver toilet, you know they don’t always work as well as they should. In fact, many of the original models didn’t even save water very effectively. That was what got Bill Gauley into the toilet performance rating business back in the mid-1990s. Out of curiosity he measured the amount of water actually consumed by a new toilet he bought in the 1990s. Finding that it used four liters more than the claimed 6 liters per flush, he took a closer look at other toilets.

Bill Gauley’s findings proved many of the so-called ‘water-saver’ toilets on the market:

With funding from Canada Mortgage and Housing Corporation (CMHC) as well as both Canadian and American municipalities, Gauley’s Ontario-based company, Veritec Consulting, influences toilet manufacturers and environmentally-conscious municipal leaders across North America for one simple reason:

Water Wasting Champions of the Globe

Now if we could only get Canadian provinces to follow the leadership that the rest of the world has taken from our own research, we’d really have something to be proud of.