Have you ever seen a residential development in a beautiful place that really does preserve the qualities that attract people there in the first place? It doesn’t happen often, but every once in a while I see rare examples of this kind of success, and one of the most noteworthy began in June 1972. That’s when Bryan Barfoot and Barbara Widmeyer were flying in a 1946 Aeronca Chief, on a cross-province sightseeing trip. And as they looked down out of the two-seater cockpit a few minutes before landing at a small island airport, they saw something that would change their lives eight years later. It was a small body of spring-fed water right on the island itself, dubbed Nameless Lake by the 19th-century surveyors who first mapped it. 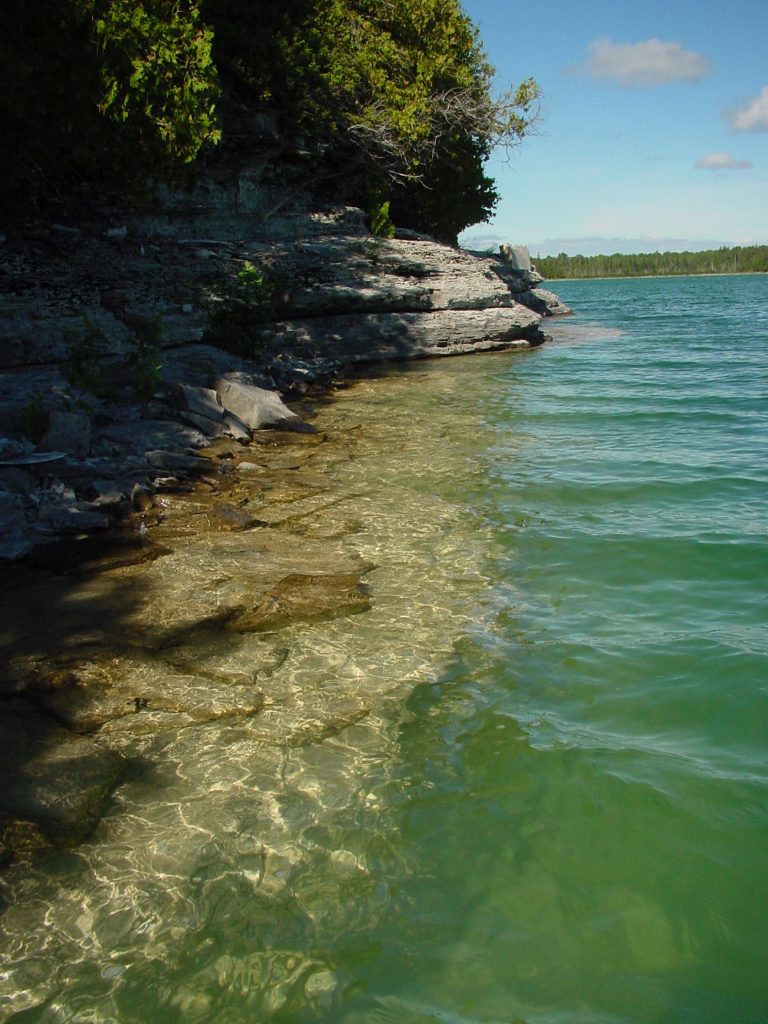 The lake is about 2 km long, shimmering green and was (and is) completely surrounded by hundreds of hectares of undisturbed forest. Six years later, when fog forced the now-married couple to make an unplanned landing on the island again, circumstances conspired to bring them to the shores of Nameless Lake a second time, though they didn’t know it until after the fog cleared. Traveling on foot, Bryan and Barbara were led to the lake by one of the Island’s few real estate agents, but it was only when they explored the place again by air the next day that they realized it was the same lake they’d admired years earlier. In time, the Barfoots would buy the 900 acres surrounding Nameless Lake, eventually making it their year-round home and the site of the most enlightened lakeside development I’ve ever seen. I’ve watched it unfold over the last 10 years in a positive way that I didn’t think was possible when people try to combine full-time living with lakes, forests and modern expectations.

When Bryan and Barbara decided to share their Nameless Lake property with others, they began with a set of environmental guidelines and architectural standards designed to keep the area quiet and beautiful. Taken together these form a foundation that eases long-term worries about inappropriate over-development that’s killing so many other cottage areas. Property owners can take comfort in knowing that their neighbours all value the protective measures necessary to preserve rural virtues around the lake. “As far as I know,” explains Bryan, “this is the only lake surrounded by private land that includes a legal covenant preventing the use of all internal combustion boat motors, regardless of future land ownership. You’ll never hear the roar of boats in this place.”

Building development is also legally restricted to twenty, 300-foot wide lots on the east side of the lake only, meaning that property owners can always count on a view of unsullied sunsets over the western shore, free from the interference of someone else’s idea of lake shore development spoiling the vista. Ownership of each three to four acre shoreline site also includes shares in 200 acres of land held in common under the title of the Nameless Lake Preservation Association. This legally incorporated body includes a board of directors and a set of bylaws to preserve the values of beauty, peace and permanence that make lakeside living so attractive.

I’ve always been impressed with the kind of strict, European building regulations governing the aesthetics of new construction and renovations, but the only place I’ve ever seen anything like this in Canada is on Nameless Lake. Here, all structures visible from the water must conform to specific requirements that demand natural materials and earth tone colours be used. These safeguards apply to everything from decks to rooftops. Bylaws also specifically ensure that service cables, satellite dishes, stored building materials and trailers remain unseen from adjoining lots. 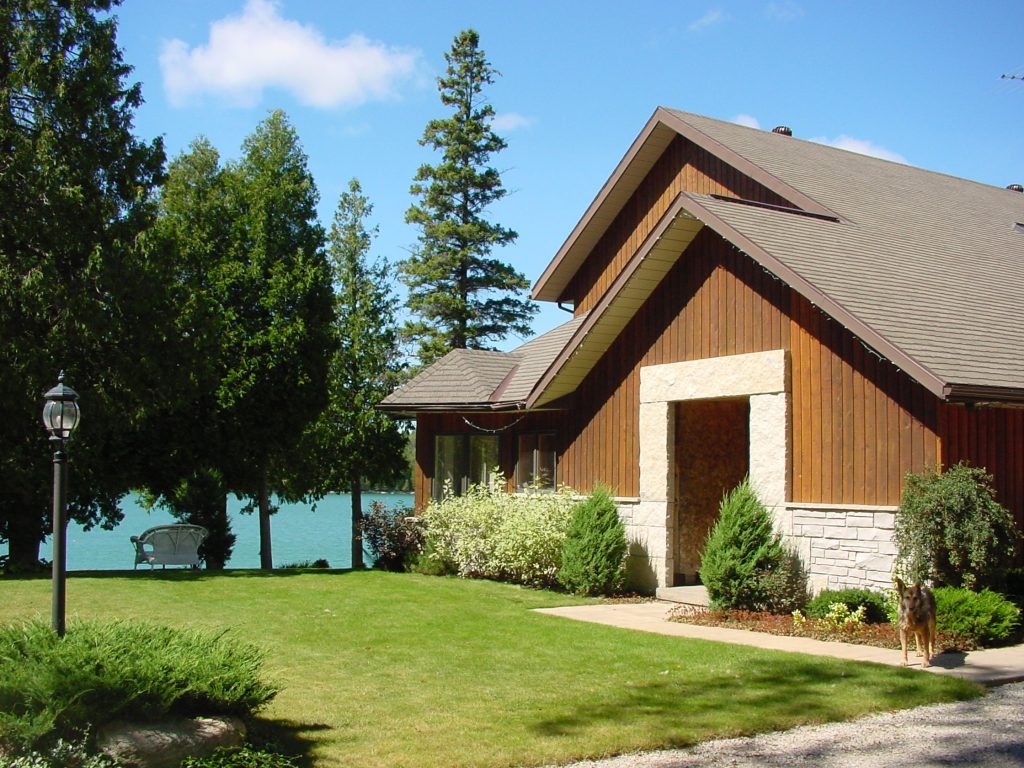 The single-owner start to the Nameless Lake situation is unique, and for this reason it would be hard to duplicate the experience elsewhere. Most rural areas began with a patchwork of land ownership titles, leading to the conflicting definitions of “appropriate” development that you’d expect from such a situation. But when you consider what a fragile and non-renewable resource the natural landscape is, every creative effort is worth taking to keep things both beautiful and sane. Surely, there’s a way to make this happen while also letting people build. 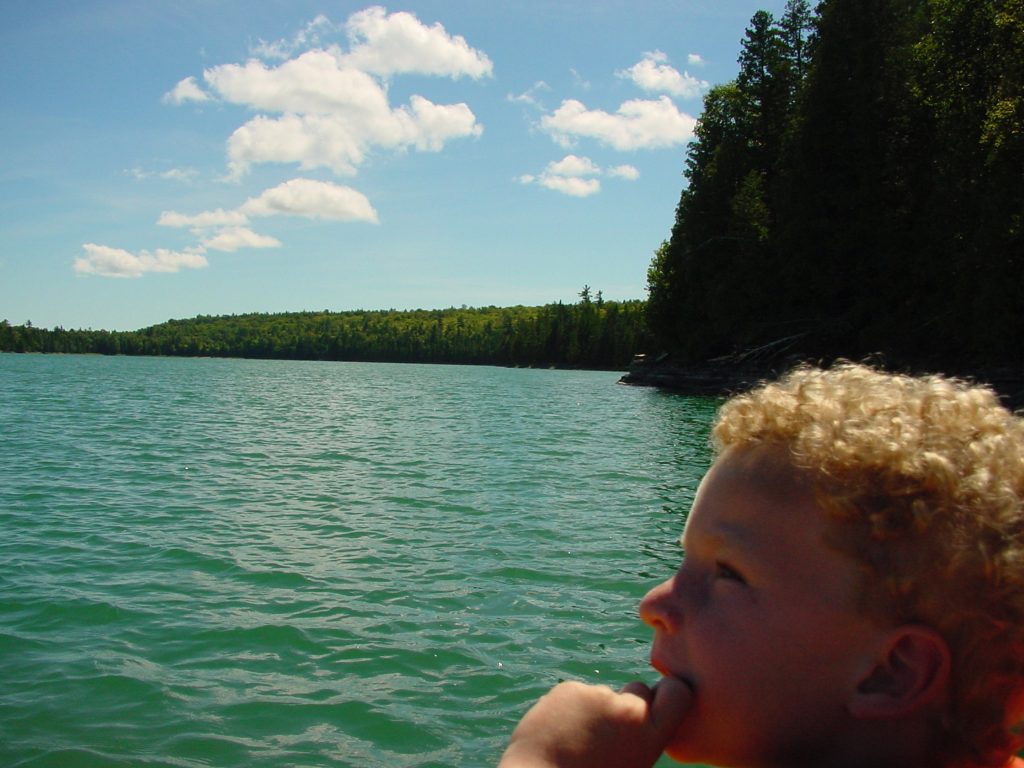 I was reminded of the urgency of this need in an undeniable way as I floated around Nameless Lake in a paddle boat with my three-year old (That’s him above. He’s now 23 years old). I’d just returned to the area from a trip to the big city where I was exposed to more highway exhaust, road-enraged drivers, and fast-paced shopping mall experiences than I’d bargained for. It’s nice to know that there’s at least one piece of emerald-green, limestone shoreline where people can live without the worry of losing the fragile values of their special home place.

Did you find this article interesting? I hope so. Please consider helping me cover the cost of producing and publishing content like this. Click the “buy me a coffee” button and you’ll find it easy, fast and safe to make a donation. Thank you very much to everyone who is helping out.