Canadians love decks, and while those built to code are perfectly safe, it’s always wise to keep your eyes open for warning signs. Everything eventually deteriorates, and no one else is going to monitor the state of your deck for you.In general, there are two sources of possible danger: 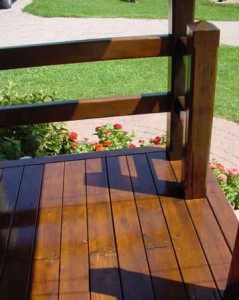 Fortunately, the most likely source of deck trouble is also the easiest to spot: a rotten floor. All wood, even pressure-treated lumber and cedar, eventually rots. It’s just a matter of time. And while it’s not always easy to see rot underneath a ground-level deck, it’s always worth looking everywhere you can, beginning on top.

By the time you see rot on a floorboard, beam or post, the damage is always more extensive than it appears. That’s why you’ve got to resist the temptation to ignore warning signs. Look deep.

Most decks are built on top of two kinds of support systems:

The option of bolting a deck to a wall is almost always used because it saves time and money by making use of the existing support offered by the building. Trouble is, if the deck-to-house connection isn’t sound, it can result in a sudden collapse of the deck under heavy loads. While a rotten deck board might let your leg collapse into a hole after months of spongy warnings, a connection failure can let the whole thing fall down in a heartbeat, tilting in towards the house as it does. And while the potential loss from collapse increases as deck height goes up (the higher you are, the harder you fall), it’s also easier to inspect the deck-to-house connection on tall decks.

The bottom line in all this is simple: enjoy your deck, but be diligent. Life is never without risk, but a few minute’s attention are all you need to whittle your deck top worries down to size. And after you’ve done that, your biggest deck concern shouldn’t be anything more taxing than what to put on the barbecue this weekend.