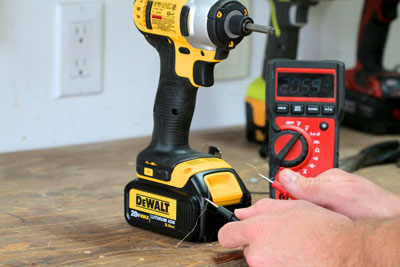 Cordless power tools are getting smaller in physical size, yet more powerful and effective. These are the reasons cordless tools are taking over so many building and renovation tasks that used to require an extension cord. But one thing that hasn’t changed in a while is voltage options. For the first 10 years after cordless tools came out in the mid-1980s, manufacturers played a frenzied game of one-upmanship with each other, temporarily leap-frogging the competition with higher voltages and more tool power. That left us with very muscular, high-voltage drills, but also a lot of confusion from many different and incompatible charger and battery combinations. So when I heard that DeWALT was launching a 20-volt MAX line of tools to compete directly with the 18-volt models that are currently the stable mainstay of the industry, it made me take notice.

I’ve been using DeWALT’s 20V MAX drill and impact driver in my shop and on building projects for several weeks to get a first-hand sense of power, weight and run time. They’re due to appear in stores in October 2011, and this begs a question. Are 20-volt tools significantly better than 18-volt?

The first thing I noticed about the 20V MAX line was speed and power. They’re certainly peppy when you pull the trigger, but to assess performance more accurately, I pitted a 20V MAX impact driver against the best performing 18-volt impact drivers I’ve used so far. The test involved driving 4 1/2”-long structural screws into and out of red oak logs as many times as possible on a single charge, counting the number of drives and calculating the average time per drive.

Before I explain what I found, there’s something you need to understand about all cordless tools. Although individual models are always marketed as having some specific voltage – 12-, 18-, 28- or 36-volts, for instance – the reality is that battery voltage is a rather fluid thing. Measure the voltage of a fully charged cordless tool battery pack at rest, for instance, and you’ll get one reading. Measure that same battery while the tool is operating, and voltage specs will be considerably lower.

Today’s so-called 12-volt cordless tools, for instance, actually operate at about 10.8-volts while they’re working. European laws require that cordless tools be marketed with operational voltage numbers only, not the no-load numbers used for marketing here in North America. That’s why you’ll find plenty of 10.8-volt tools across the Atlantic, but no 12-volt models. Manufacturers aren’t allowed to advertise that number, even though the tools are identical to the 12-volt models we buy and use here.

According to the battery packs I’ve tested, DeWALT’s 20V MAX line develops a fully charged, no-load voltage of about 20.59. The interesting thing is, all the so-called 18-volt cordless tools I tested – old or new – also have no-load voltages greater than 20 volts. Even my ancient 18-volt drill with primitive nickel cadmium batteries registered almost 21 volts at rest.

But as I’ve discovered, there’s a huge difference in how battery voltages hold up while you’re doing work. By fastening small wires to the battery packs while they were locked in place on the tools, I measured surprisingly different voltage levels while tools were working. That old 18-volt nickel cadmium battery registering 21 volts wilted to a sad 15.5 volts while the drill was operating at full load. By comparison, the operational voltage of DeWALT’s 20V MAX lithium-ion batteries dropped to the low of only 18 volts level in an impact drivers while sinking those big screws into hard wood during my tests. Like I said, cordless tool battery voltage isn’t as clear cut as the numbers imply.

The ability of batteries to maintain voltage under load is the biggest advantage of the latest breed of cordless tools powered by the latest generation of lithium-ion batteries. Nameplate numbers aren’t as important as they seem.

Out of the entire line, I’ve only had the chance to test the 20V MAX drill and impact driver so far. Both perform well. The impact driver is one of the shortest and most compact I’ve used, with power and endurance similar to competing professional-grade tools. Charger compatibility is a unique feature of the 20V MAX collection, and it puts to rest my initial fears about incompatibility cause by a new voltage platform. The 20V MAX charger also handles batteries from DeWALT’s previously released 12V MAX tools. These smaller sub-compact models are part of an industry-wide trend towards tools that can fit into your pocket, yet can handle anything up to medium-duty drilling and screw driving jobs. Having one charger that does double-duty for both small and large tools is definitely a worthwhile innovation, and just one more example of how cordless tools keep getting better.