Every time I drive down a street lined with buildings on a bitterly cold day, I have mixed feelings. On the one hand I’m so thankful that we’ve got the resources and technology and skills to build and heat homes capable of keeping lethally cold temperatures at bay. That’s certainly a good thing. But as massive clouds of smoke and steam billow from chimneys 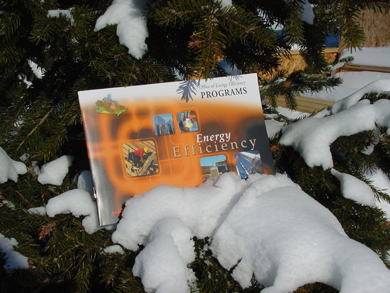 everywhere, I’m also worried. At this time of year we’re all entirely dependent on technology for basic survival. When it’s 30-below Celsius, we’re as dependent on our homes as astronauts are within their space capsule. And the current technology that keeps us alive is very hungry indeed. Just think of the vast quantities of energy that get sucked back by thousands of furnaces running full-blast on a cold night, and you’ve got to wonder. Sure, we’ve got the energy resources now, and most of us can pay for them, but such heavy reliance on energy inputs is never good. It leaves us vulnerable to grief: financial, environmental, technological. And evidence that this realization has filtered up to government decision makers is why I’m so delighted.

The financial energy efficient grant program delivered under the EnerGuide for Houses umbrella is a case in point. It’s a federal initiative that’s available to Canadian homeowners right now. It’s also the best example of government energy stewardship I’ve seen in 20 years of watching and hoping. The reason for my optimism is because this program does something that has never happened before: it rewards only real and verified energy efficiency improvements. This isn’t the kind of thing that usually comes from government, and that’s why the EnerGuide program is unique and exactly what’s needed right now.

This is part of a seven-year initiative to add energy efficient retrofits to 20% of our country’s low-rise housing. It’s a manifestation of Canada’s Kyoto commitments and is aimed especially at improving our stock of older — and generally more wasteful — houses. Greenhouse gas realities are the driving force behind the incentive grant and I’m confident we’re on the right track.

The grant process starts with an energy audit of your home in its present state. This work must be completed by a qualified EnerGuide for Houses energy adviser and typically costs a couple of hundred dollars. You pay this audit fee and the results form the baseline for measuring efficiency improvements you make on your home at your own expense. Since it’s impossible to accurately estimate the amount of improvement until work has happened and a follow-up energy test completed, an exact figure you’ll get for the incentive grant can’t be quoted ahead of time. Instead, you’ll receive an estimate of the dollars you could see from the government at the time of the initial audit. The grant is eligible only once per owner, for the one house you’re living in.

What sorts of things are likely to appear on a post-audit to-do list? That depends on the age and condition of your home, but typically includes the usual stuff: increasing insulation levels, furnace replacement, retrofit work designed to keep drafts out, new windows, and other similar items. Grant moneys don’t come for improvements in air conditioning equipment because the energy used for summertime cooling results in relatively little greenhouse gas production. And remember, the EnerGuide process is designed to reward actual gains, so it doesn’t specify how to make improvements, as long as they reduce heating needs at the bottom line. Instead, the program empowers homeowners to choose what’s best for themselves, based on what the initial audit revealed. All that matters is that we reduce greenhouse gas production. The less you produce, the more money you get back for your renovations.

Can any of this really make a difference? I think so. We certainly have no choice but to try. The EnerGuide incentive program is only one example of unusually astute actions taken by our federal government right now. The Office of Energy Efficiency Programs operates within Natural Resources Canada and administers 20 similar initiatives aimed at helping industry, our transportation fleet and other branches of government to reduce energy use while also maintaining current lifestyles.