From what I’ve seen, choosing paint colours has got to be one of the leading causes of household discord in this country. Most people don’t choose paint very often, and that’s a good thing because the exercise often degenerates into the kind of horror stories we’ve all been part of. It begins with the futility of choosing the colour of an entire room from tiny paint chips. Then there’s the inevitable problem of the paint looking different on the wall once it dries. Add to this the different colour preferences and pickiness of various housemates and you’ve soon got flared tempers, less-than-hoped-for colours and a renewed distaste for the whole painting fiasco. Hassle reduction was the reason I took a close look at a little electronic unit called the Dulux Inspirations device, but I wasn’t hopeful that it would help until something surprising happened to change my mind.

The Inspirations device is unique in Canada, it looks like a thick cell phone, and it does something that I didn’t think possible. Place it against anything you want to match with paint – a couch, carpet, furniture, wall hanging or wood floor 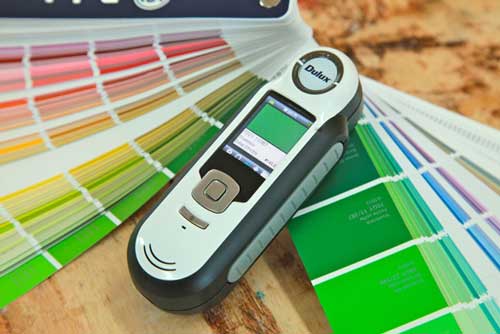 – press a button, and the device generates a whole range of harmonious colour options that are supposed to match. I say “supposed to”, because I’ve always believed there was no such thing as right or wrong when it comes to colours. Surely colour choice is just a personal thing, right?

Brad Elkins is senior brand manager and a colour guy at Dulux, and the 30 minute phone call we shared changed everything I’d ever believed about colour. I now understand that harmonious absolutes really do exist in the world of colour, just as they do in the realm of mathematics and musical harmonics. And that homely little electronic device with the long name can help you find the sweet spot.

The first thing that began to change my mind about the Dulux Inspirations device was how accurately it can identify individual colours in the colour chip spectrums. Hold the electronic eye of the device against one of the 2016 colours in the Dulux colour fan, and it’ll tell you exactly which one it is, right down to the number. The various colours in the fan deck are often only subtly different, and though the device may make occasional identification errors, it’s never been wrong for me.

While recognizing colours accurately is one thing, that’s not the same as selecting paint to match your living room couch. This is where the device’s colour suggestions come in. Despite my doubts, I have to admit that the recommendations I looked at were very pleasing to my eye. They were also pleasing to my wife’s eye, and that’s a level of agreement that’s never happened before in 23 years of marriage.

Scan an existing colour somewhere in a room, click a button, then look at the range of suggested options. The screen includes small colour samples, along with numbers that correspond to specific colour chips. This exercise narrows the choices to a manageable level and eliminates that overwhelmed feeling you get standing in front of a universe of colour chips, thinking, “where do I start”? I found this most useful in selecting vibrant colours with confidence. The Inspirations device also includes a voice recorder so you can tell it what you’ve scanned (i.e. “rec room couch”), then play back your voice description later.

Programming behind the Inspirations device comes from two sources. The majority of the possible suggestions are based on the mathematics of the different wavelengths of light that make up pleasing colour combinations. This approach works in most cases, though neutral colour matches sometimes don’t work out strictly by the numbers. That’s why Dulux also enlisted the help of 20 recognized colour gurus from around the world, to manually check on the tens of thousands of different colour combinations offered by the Inspirations device.

There are two main ways you can make use of this thing:

Are you in the painting or interior design business? Do you have a large home of your own to paint? At $500 each, buying your own Inspirations device isn’t cheap, but the hassles saved could easily be worth more than this. It may also be the most economical form of marriage mediation available.