How can I insulate the double-brick walls of my 100-year-old home? One contractor says he can drill holes in the plaster and blow insulation into the space between the bricks. Another contractor says this isn’t possible. Who’s right?

Home heating may be far from everyone’s mind right now, but you’re wise to plan for it. And while it’s certainly possible to go through the motions of drilling and insulating, chances are slim that this operation will do any good. There are two reasons why. If there’s any substantial space between the bricks, it’s probably choked with hardened 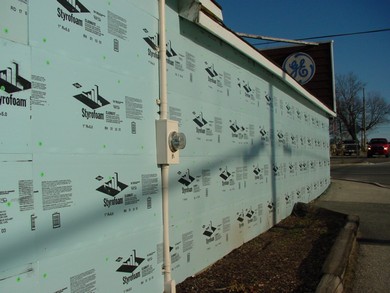 bits of mortar that fell into the space as the bricks went up. And even if you could somehow get the insulation to flow properly between the bricks all the way from floor to roof, it’s almost certain to go soggy and moldy in short order. Bricks aren’t good at keeping rainwater out, especially old bricks. The contractor who’s been discouraging you is the more competent and/or honest one.

The best approach for insulating older masonry homes involves applying two inches of extruded polystyrene foam to the inside or outside face of exterior walls. This is a big job involving tricky finishing work around windows and doors, but it does work. Trouble is, it only makes sense if you’re planning to install new siding on the outside or drywall on the inside.