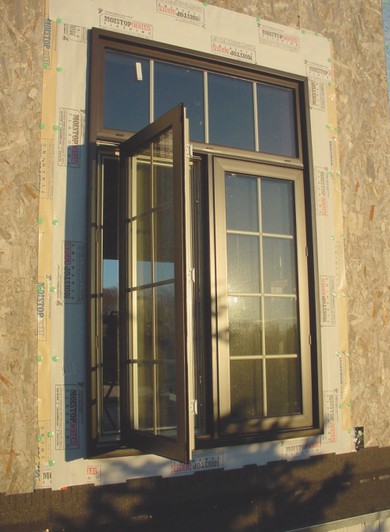 We’d had a few hours of light rain during the morning of July 17th 2005, and I went out to my newly closed-in workshop to revel in the dry space that surrounded my tools and woodworking equipment. That was when my heart hit the ground with a great big thud. I’d spent $20,000 on eleven high-end Repla casement windows for the building, and they were my favourite part of the workshop. Favourite, that is, until I saw the pools of water that lay underneath them on the floor. And as I kicked myself for what must surely have been a poor installation job, closer examination with a flashlight made me feel even worse. Water was leaking through seams in the vinyl windows themselves. The installation itself was fine. These windows, fully installed now, flashed and flanked in siding were leaking badly because of a manufacturing defect. And it wasn’t even raining all that hard.

Besides enormous disappointment, that grey summer day left me with big questions that I’d spend the next three months answering. How could premium windows from a reputable company have such a blatant defect? How could this fault have slipped past the CSA performance designation found on every window in my shop? What would the window company – Repla — do to make things better? In the end, my window saga had a happy conclusion, though not because of assistance from any of the sources you’d expect. In fact, what I experienced was the longest chain of buck-passing I’ve ever been a part of. But in the end, the rigmarole made the final success all the sweeter.

It took multiple phone messages, emails and several weeks waiting to hear back from the ‘very busy’ salesman who helped me with my original window purchase. And what he told me only made matters worse. “Repla went bankrupt earlier in the year”, this guy explained, “and the firm that took over the old company name isn’t bound by the warranty you have. Sorry. Just put some caulking on the windows and you’ll be fine.”

Be happy with twenty-grand worth of windows that depend entirely on caulking to keep water off the drywall? I don’t think so.

A letter to the new owner of the Repla name led to the enormously comforting assurance that my issue had been handled in a most professional and timely manner, but there was simply nothing more that could be done. “Good-bye, and have a nice day.” I learned later that this guy went bankrupt, too. 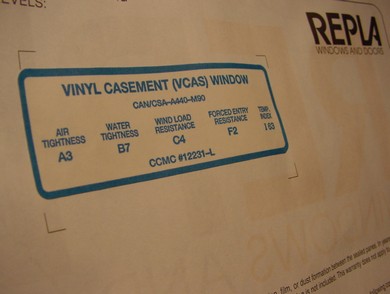 So what about that CSA performance sticker on my windows? Doesn’t that count for anything? The Canadian Standards Association is in the business of performance and safety certification, and my leaky windows carried their prestigious A440 rating. A call to the public relations department at CSA revealed that although the letters CSA were, indeed, on my windows, this didn’t actually mean the product was ‘verified’ to A440 standards. In fact, my windows were only ‘assessed’ to the A440 guidelines and not even by the CSA themselves. CSA wasn’t responsible. An outfit called the Canadian Construction Materials Centre (CCMC), a division of the National Research Council, tested a sample of the kind of vinyl extrusions (not the entire window) used on my style of windows back in the 1990s. That lab sample met the A440 standard at that time, hence the sticker.

But the buck continued to pass when I learned that the particular A440 standard on my windows had actually been revoked by CCMC more than five years ago. The window manufacturer had been informed to cease using the designation back on September 22, 1998, but failed to do so. And since the CCMC doesn’t actually police the use of designation stickers they issue, the deceptive use of the rating isn’t their problem. “Have a nice day, sir.”

More than a year’s worth of rain has since fallen on my windows, and all eleven are completely weather tight and reliable. In the end, after talking to sealant and weatherproofing experts across Canada and the US, I developed a unique DIY solution for my windows that you can bet your life on. In fact, I’m almost glad I’ve had all this trouble because of where it has led me.