Q: Is moss on a house roof a serious problem? About 20% of the asphalt shingle roof area of a house we’re looking to buy has moss growing on it, mostly near a large maple tree. Is there a proper way to remove this moss without damaging the roof? Should we get rid of the tree if we buy the place? 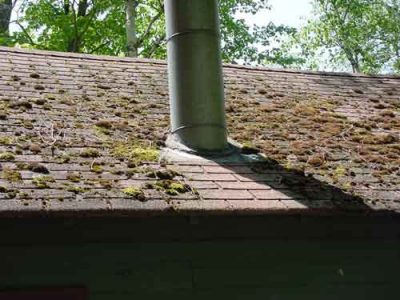 Notice the lack of moss downstream of the chimney and flashing. This happens because tiny amounts of zinc get dissolved from the chimney. It doesn’t take much, but a little zinc stops moss and lichen from growing on roofs.

A: The short answer is “yes”, rooftop moss and lichen does shorten roof life. In fact, it cuts asphalt shingle lifespan by about 30%. Moss and lichen on roofs are not uncommon and it doesn’t necessarily happen only in shady areas. I’ve seen quite thick growths in full-sun locations. This is especially true with lichen. The good news is that there are ways to remove the existing growths and prevent re-growth. Don’t cut down the tree if it’s healthy. Different products are sold for cleaning up roofs. I’ve used an oxygen-based stainer remover for this job, a plastic bristle brush and a garden hose to remove moss. Some moss removers promise scrub-free results, but these take time to work. A little scrubbing goes a long way.

To prevent moss re-growth, install strips of zinc underneath the top course of shingles. Building supply outlets everywhere sell it in rolls. Itâ€™s not cheap (about $1 per foot), but it does work. Small amounts of zinc will be dissolved as rain runs down the roof, preventing new moss and lichen from getting a foothold. It’s completely safe for people, pets and plants. You can see this effect happening accidentally around certain kinds of metal chimneys and rooftop vents that have zinc coatings. The moss-free effect is really quite striking. 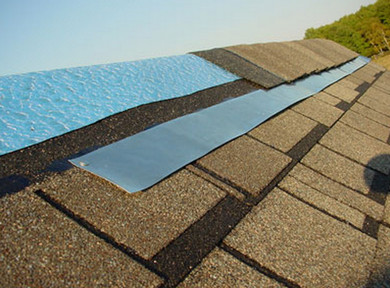 This is a zinc strip I installed at the peak of my workshop roof in 2007 when I built the place. The roof still looks new (and is completely moss-free). This detail will keep roofs moss-free for 20 feet downstream of the zinc. If your roof is longer than this, install another strip of zinc half way down the roof.

To install zinc strips on a roof you’re reshingling, nail down the zinc so an inch or two is exposed after the cap shingles get installed. If you’re adding zinc to an existing roof, you’ll find it easiest to pry up the bottom edge of the top-most coarse of shingles, slip the zinc underneath, fasten it with roofing nails every 3 or 4 feet, then place a blob of roofing tar from a caulking gun every 8 to 12 inches to hold the shingles down in the wind. The zinc strip shown above was eventually capped with more cap shingles. Although shiny when new, zinc goes quite dull in time, making it not too noticeable.

When retrofitting an existing roof, you’ll find it easiest to pry up the bottom edge of the first course of shingles down from the top, as opposed to the cap shingles (as you see on my workshop), then slip the zinc strip underneath. Use a cat’s paw pry bar and lots of care during this work. You don’t want to tear the shingles. When a pry bar is unable to loosen existing shingles I’ve used a toothless scraping blade in a multi-tool to break the seal underneath the shingle that holds it in place.

Do you need a new roof? Click here for detailed information about what goes into a good job. Useful for DIY roofers and people who want to intelligently hire a pro.

GOT WONKY CABINET DOORS? Here’s How to Fix Them
Read Now