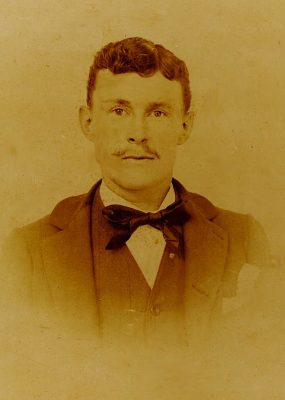 It goes without saying that being a contractor is about making money. Building and renovation is a business. The contractors you hire have families to feed and retirements to hope for, just like the rest of us. But I’ve found that the best contractors leave the world with more than just a quest for profits.  They’re also part of a centuries-long history of heroes. That’s why you need to meet a man named Charles Caskey. That’s him to the right

Until the fall of 1886, 35 year-old Caskey had only built cottages. But that didn’t stop him from bidding on construction of a 210-room, 625-foot palatial hotel funded by a consortium of railroad and steamship companies as a destination for summer tourists. To make the challenge of this project steeper, the building site was on a small island called Mackinac, 7 miles from the shore of a remote part of the northern Great Lakes. Then there was the building schedule. This new hotel had to be open and ready to accept guests in the summer of 1887, less than a year away. It absolutely had to be done because rooms had already been sold.

Caskey closed his cottage-building business for a year, he borrowed huge amounts of money, made timeline promises to wealthy barons like Cornelius Vanderbilt, and assembled a crew of 600 men to live in a tent village set up in the snows and mud of Mackinac Island on March 1887. Similar monster projects around the northeast had depleted the labour supply to the point where Caskey had to pay double wages to get the workforce he needed.

When the world descended into financial darkness in 1929, it threw the Grand Hotel into deep trouble. The place stayed open for a few years, but eventually debts put it on the auction block. On a cold, March day, officials travelled over the ice to Mackinac Island to go through the formalities of offering the place up for bid. The plan had been for the debtors to take ownership, then tear the place down, salvaging what the could by selling the lumber and building materials as scrap. But they hadn’t counted on a visionary young man named Stewart Woodfill. He had worked at the Grand as a clerk, and had managed to scrape together enough money to buy the debt-ridden hotel, saving from the jaws of destruction. Mr. Woodfill opened the hotel the next year, and kept it open all through the dirty 30s and World War II. It wasn’t until 1951 that the Grand Hotel actually turned a profit on its hotel operations. On July 11, 1939 for example, the hotel had 11 paying guests served by 411 employees. Today this famous and profitable hotel is still run by Mr. Woodfill’s family. 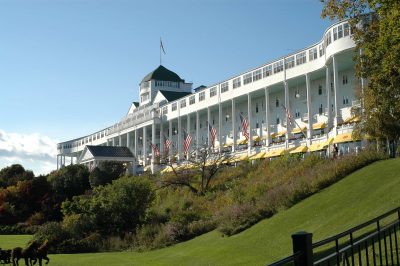 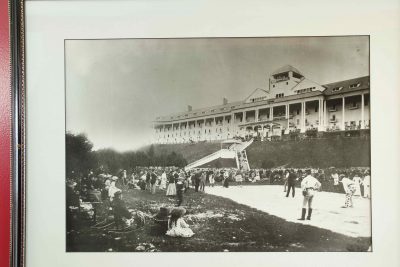 A total of 1.5 million board feet of lumber was sledded across the ice with horses day and night over the winter of 1886/87, until the pile was large enough to see from the mainland. Locals called the project “Caskey’s Folly”. When construction work began in March 1887, three shifts of tradesmen would eventually be pressed into service, working around the clock by lantern and candlelight. But before that even begun to happen, labour unrest flared. Troublemakers learned about the tight building schedule, so they demanded triple wages. “If we don’t get them, we don’t work and you go down.”

Caskey stood his ground: “Double wages is what we agreed on, and double wages is what you get. And if you don’t like it, you can leave the camp and make your own way back to the mainland. You’re not eating any of my food, you’re not sleeping in any of my tents and you’re not  leaving on any of my boats if you quit. The next public boat doesn’t get here for three weeks.” After that bit of head butting, the men got down to what must have been an awesome work pace.

The most amazing part of Caskey as contractor of the Grand Hotel is not just that he pulled off the job with a crew living and working under conditions primitive enough that modern labour inspectors would shut the site down today. It’s not even that all the work happened without electricity, power tools, compressed air or an army of sub-trades ready to swoop in  with specialized gear. The truly stunning thing is that the place actually did get done at all. The photo above was taken a few years after the Grand Hotel opened.

The first rich and privileged Grand Hotel guests stepped off the luxury steam liner that tied up on Mackinac Island, they walked into the lobby of the Grand and checked in on July 10, 1887. Only 93 days earlier the place was nothing more than a mud hole next to a towering pile of white pine lumber. Similar hotels took nearly a year to build at the time. I doubt any of the guests could have realized what an amazing display of stamina was behind the place they’d spend some pleasant summer days, but I do. And doesn’t it just make you want to go out and build something great yourself?