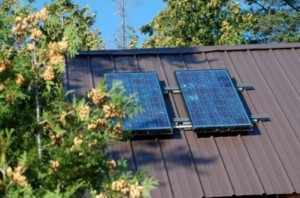 I finally know what I’m going to be when I grow up, and it’s the same career I decided on 30 years ago, then abandoned. When I graduated from high school in the late 1970s, I knew for sure that the world needed energy. And since oil was obviously going to run out, I enrolled in George Brown College to become an alternative energy guru. Photovoltaics (PV) was one of my favorite topics. That’s those flat panels you put in the sun to make electricity directly, without any moving parts.

There was one thing I didn’t realize as a brand-new college student. Except perhaps for calculators, the world wasn’t seriously ready for photovoltaics back then. In fact, the situation wouldn’t change until two things happened:

I was obviously ahead of my time with regards to my career planning, but both those two trends have been happening lately, big-time. According to a report issued by the Washington-based Earth Policy Institute this past December, the magic moment when the cost of photovoltaic electricity drops to meet the price of fossil fuel production is just two years away. No one’s talking about this much, but it has huge and bright implications for the future.

The production of PV panels worldwide has skyrocketed by about 48% a year each year since 2002. Right now there’s enough PV generated electricity in the world to power 2.4 million modern homes. And while this is still a drop in the bucket compared to the world’s total energy needs, you’ll be hearing more about photovoltaics in the near future. One reason is the huge potential.

All of this has several long term implications for you as a homeowner:

That said, the fact that PV power is poised to become competitive in world energy markets is terrific and encouraging news. It’s also being used to good advantage by the most progressive countries:

Too bad for me it all took 30 years too long to happen.