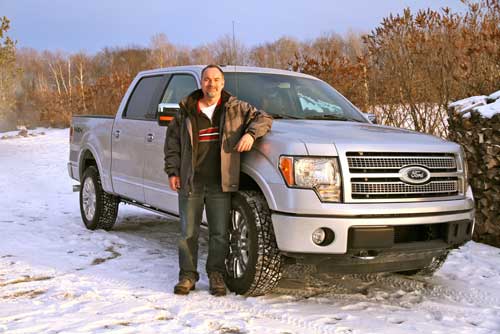 In one sense, a pickup truck is really a big power tool because it makes so many DIY jobs possible. But unless you’re a professional builder, you’ll also need your truck for everyday driving. Practicality and comfort were the two main qualities I kept in mind during the one week and 600km test of the 2011 Ford F-150 this past January, and I’ve got to say that this machine surprised me.

My kids complained when they had to climb back into our late-model mini-van after sending the F-150 back to Ford.

It’s All in the EcoBoost Engine:

Comfort is one thing, but every truck stands or falls on its ability to perform, and the EcoBoost engine in the F-150 I used is a big part of why this truck is unique. Even though it’s only a 3.5 litre V6 (small for a full-size pick-up), this gasoline engine puts out more horsepower than engines with 40% larger displacements, while also delivering best-in-class fuel efficiency. Direct fuel injection into the cylinders (just like a diesel), and exhaust driven turbo charging are two reasons why. Towing capacity is 11,300 lbs, compared with 9000 lbs for competing trucks.

During my research I also discovered a series of videos that show a single EcoBoost test engine surviving what seems like an impossible string of trials: 240,000 km run on under harsh conditions in a lab, installation in a truck used to pull 100,000 lbs of West Coast logs, 24 hours pulling an 11,000 lbs trailer at full throttle, winning uphill drag races against brand new competing pickups pulling 9000 lbs trailers, then finally entering and winning the Baja 1000 desert endurance race. I’ve been around engines for a long time, and never seen anything like this.

The only thing I didn’t like about this model of F-150 was the short box that came with the particular super cab configuration I had, but that’s not much to complain about. If you’re looking for the world’s largest power tool that’s also more than comfortable enough for everyday use while delivering about 30 mpg on the highway, you might want to look at this model.