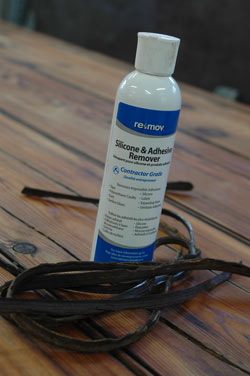 Removing old caulking before applying new used to be my biggest caulking challenge, but not any more. In fact, I rather like the job, and one particular product is the reason why. The stuff is called Re-Mov (877-807-3668), and it’s a clear, virtually odorless liquid that breaks the bond between old caulking and the surface it’s stuck to. Squirt some on, watch the edges of the old caulking pucker and curl for 10 or 15 minutes, then scrape it off. The process reminds me of dousing blood suckers with salt when they latch on between your toes after swimming.

3M used to offer a fairly effective caulking remover gel, but they stopped selling it in Canada a while back, leaving a pretty big hole in the market. After years of unsuccessfully looking for an alternative, I’ve finally discovered something that works astonishingly well, even on really stubborn caulking challenges like silicone.