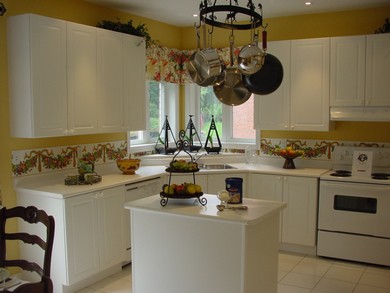 If you’ve got your eye on new kitchen cabinets for your home, stop to consider more than just appearances. Good looks need to be coupled with durable design, and here’s a heads-up on three key details that help ensure your biggest kitchen investment ages gracefully.

The desperate post-war need for new housing in Europe led to the creation of a super-efficient approach to kitchen cabinet construction that has since spread to the rest of the world. One of the most important parts of this method is the so-called European hinge, a standard feature on almost all kitchen cabinets built in Canada today. Although they’re always invisible when cabinet doors are closed, you can identify them by the complicated looking mechanism that becomes visible when doors are opened.

Another feature that makes modern cabinets easier to build and more reliable is the mechanical drawer slide — those metal and plastic tracks usually seen along the bottom edge of drawer sides. These have eliminated the frustration of sticky, all-wood drawers that were common even in commercial cabinets built as late as the early 1970’s.

I’ve got young kids around my house, so I know what it’s like to keep the little darlings out of the cereal cupboard. Hardware stores everywhere sell flexible nylon hooks that mount to the inside of doors to make them childproof, but if you’re having new cabinets built there’s a better way.