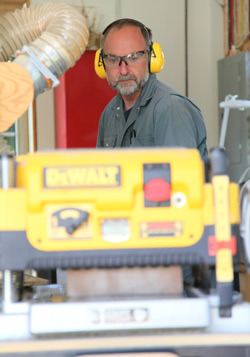 I’ve been using my thickness planer a lot lately and this got me thinking about the questions people often ask me about planers. The first is simple: “Which one should I buy?”

I know from testing many planers over the years that most models are based on the same internal cutter head. Different makes and models look different externally, but the machinery that actually cuts the wood is nearly identical in almost all cases. And even comparing truly unique planers with the majority, there’s no noticeable difference in the smoothness or speed of planing results.

Of all the bench-top models out there, my current favourite is the DEWALT 13”. It’s got a built-in vacuum fan which virtually eliminates any chance of a shavings plug-up. This condition is not unusual in most bench-top thickness planers making heavy cuts while not connected to a dust collector, but almost unheard of with the DEWALT.

The second question I often get has to do with wood sticking in the planer. All new machines will feed wood without problems, but after a while boards start travelling slowly and stopping altogether. As simple as it sounds, paste wax is the solution. Unplug your planer, raise the cutter head, wipe some paste wax on the bed, then buff it off after it dries for 15 minutes. You’ll enjoy like-new planing results, at least until the next time you need to dig up the wax can.

The third question I often here is this: “What can I do to stop snipe?” Snipe is a word that describes a slightly deeper cut on the last few inches of a board. Some planers are worse than others, and a few are specially designed not to snipe at all. I’ve never found snipe to be an issue with any planer, and  there are two reasons why. First, planing can almost always be done before boards are cut to final length. Trim later and you get rid of snipe. But even if some snipe remains, all project parts should be sanded before assembly, no matter how smooth it feels. You’ll get better finish results with sanding, especially if you’ll be applying stain. A little bit of sanding removes all snipe. Some of the planers I’ve owned over the years have been snipy, but the DEWALT I run now is almost snipe-free.

Got a thickness planer with dull blades? Click below to see the video I made back in 2008 on planer blade maintenance and blade replacement.