Over the last couple of years I’ve been getting more than the usual number of emails from people looking for advice on how to earn a living outside the city, ideally without commuting. I can only guess that as cities get more congested and expensive, more people are wondering if there’s another way to live. I know there is because I’ve earned a commute-free living for my family from a remote rural property on Manitoulin Island, Canada for more than 20 years. 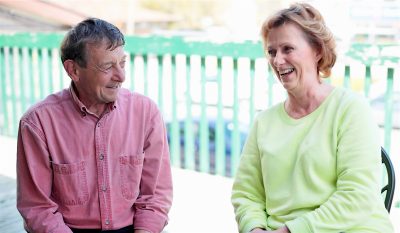 Many regions in the world would be better if more people broke free from the daily grind of a commute in busy, expensive places, so I’m always keeping my eyes open for folks who’ve done just that. Bill and Joann Woods are two people that come to mind. They live in a small town near my place, and their story is interesting because it shows how good things can happen with a little simple innovation and hard work.

Bill and Joann grew up in the small town of Gore Bay, Manitoulin Island, Ontario in the 1960s and 70s. Population of the town back then was 750 people, now it’s 900. They loved the place and their family connections, and wanted to raise a family in their home town after they got married in 1980. Trouble was, local jobs that could support this plan were rare back then on Manitoulin. The island is like Ontario’s version of the maritimes – a beautiful spot, but not many ready-made jobs, especially back then. This is why so many of Bill and Joann’s friends simply moved off Manitoulin right after high school. It was just something you did. Even today this is still the trend. But Bill and Joann didn’t want to say goodbye to small town life, so they tried something different and it’s worked for more than 30 years. I find their story interesting and encouraging.

Every business has the same main purpose, to serve people in some way that they’re willing to pay for. In the case of Bill and Joann, the service they decided to provide was something most every place needs – a restaurant. The thing is, they were smart about it. They built their own place from scratch according to their own design. They invested in the best equipment they could find, and they designed their business to provide a second source of passive income right from the start. Like I said, they were smart.

Bill isn’t a contractor, but he thinks like one. He noticed that good rental housing properties were in short supply in Gore Bay, and that’s why he included two rental apartments upstairs above the restaurant. No, this isn’t rocket science, but sometimes you don’t need a rocket. His hope was that the apartments would provide regular income when the restaurant wasn’t as full as it should be in winter. This detail proved to be a lifesaver over the years. The only rental payment he’s missed in 30 years was when the apartments were being renovated. The rental income alone covered the mortgage on the property.

Bill and Joann applied simple innovation and smarts in the actual construction and operation of their restaurant too, and it’s paid off. Three kids raised and grown, with one living with her family right across the lane from Bill and Joann’s house, a commute-free, ten minute walk from the restaurant.  Now that it’s time for Bill and Joann to retire and do a lot more fishing (Joann caught an 11 lbs rainbow trout after work this past spring), they’re being innovative again.

Bill and Joann are selling their restaurant, but they’re not doing it in the usual way. They’re using innovation again, reaching out farther and wider using the internet. They’ve built a website that tells the story of their restaurant – www.gorebayrestaurant.com – and made a video.  Click here to watch it.

Whenever I visit the city, I wonder why so many people put up with high housing prices and long, tiring commutes. Many parts of the world have so much space and so many charming small towns that could use more hardworking people. I’m convinced all that’s needed is a little simple innovation and the faith to believe that a commute-free life really is possible. What do you think?