If you’re looking to put a clear finish on outdoor wood, I have a story to tell you about a famous Canadian sailing ship called the Bluenose II, and a class of wood finishing products called “spar varnish” that’s ideal for specific exterior applications. You can see the ship and the varnished wood in the photo below.

Many different wood finishes are called “varnish”, but when it comes to protecting exterior wood underneath a completely clear protective film, spar varnish is one of the only options worth considering. Originally developed in the days of wooden sailing ships, spar varnish (also called spar urethane) is made to resist the three main factors that cause other clear wood finishes to fail outdoors:

As it turns out, marine environments are still the most rigorous testing grounds for assessing the durability of clear, exterior wood finishes in action, and Canada’s classic sailing ship the Bluenose II is the best example I’ve seen.

Like well-maintained, traditional wooden boats everywhere, the Bluenose II is at least as much a piece of fine, floating furniture as it is an ocean-going vessel. Thousands of square feet of wood are coated and recoated each year and that got me curious: How do they do it? The wood surfaces on Bluenose II look so fine, exactly what are they doing out there on the east coast?

I discovered that the woodwork on this ship is mostly mahogany, with the mast being Douglas-fir. Some high strength items like mooring posts are made of oak. The crew maintains wood finishes throughout the sailing season, and success involves more than just incessantly brushing on yet another layer of varnish. There’s a process.

How They Finish the Bluenose II

There are two distinct approaches used for finishing wood on this ship. Finishes that are just beginning to look tired are renewed with a light sanding to scuff up the old varnish before fresh coats are applied. This is advisable not just because it saves time but also because it saves wood. Unnecessary sanding and scraping can reduce the thickness of wood when it gets finished so often.

If the surface layer of existing varnish has been breached, exposing bare wood to the elements here and there, then the crew sands or chemically strips back to a fresh surface all over, before rebuilding a new finish film from the bottom up. A class of power sanders called “random orbit sanders” are ideal for stripping failed exterior finishes like this. Click here for a video tour of random orbit sanders.

The Spar Varnish They Use

Another issue is finish choice. More than 20 years ago the people behind the Bluenose II began buying and using Helmsman spar urethane on the ship, and they’ve stuck with it ever since. When Minwax, the manufacturer of this product, got wind of Helmsman being the official choice for this Canadian sailing icon, they began offering product to the ship for free. That, of course, is a marketing strategy, though free varnish wasn’t what got the product on the Bluenose II in the first place, and it’s not what keeps it there. This stuff works, it lasts, and it’s easy to apply and reapply well. I’ve always had great results with it on my own projects, even on interior applications such as floors (where it’s not supposed to be used). 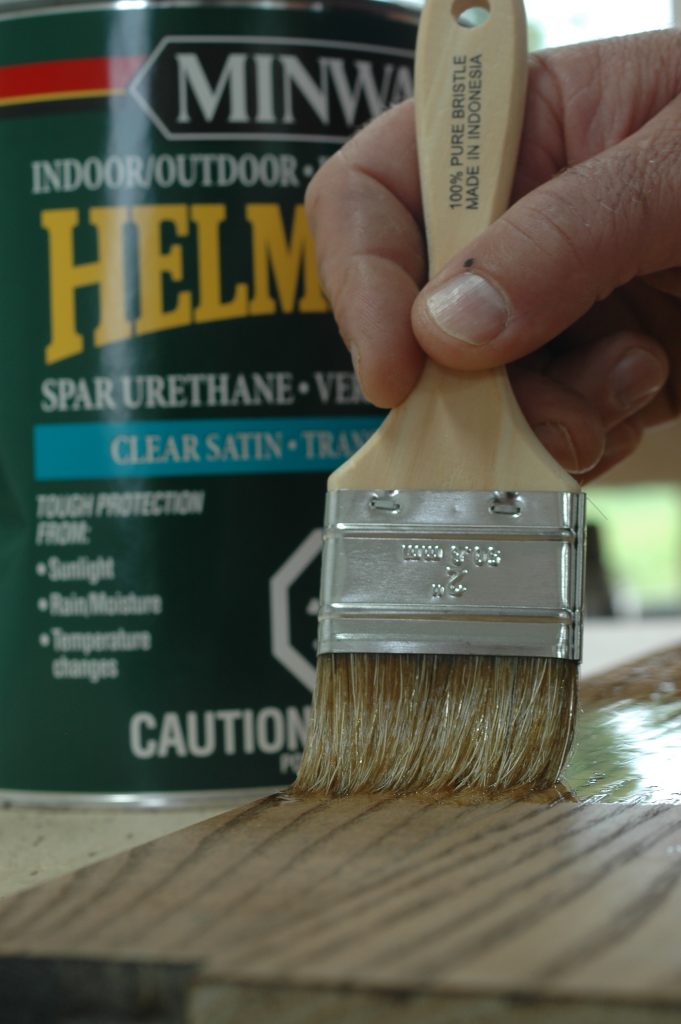 I hope you found this article useful. Please consider helping me cover the cost of creating and publishing content like this. Click the “buy me a coffee” button below and it’ll take you to a simple place to help out financially. Thank you very much!