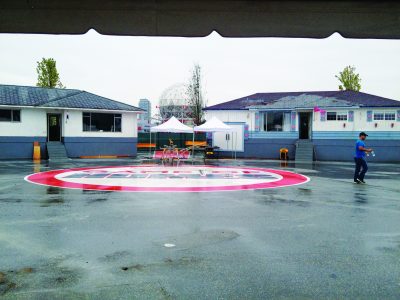 There’s nothing like stress to show what a person is really made of, and there’s nothing like watching the long-term live-in stress of couples involved in time-sensitive home renovations to keep an audience interested. This is the premise behind the new TV show Game of Homes that’s currently running on The W Network Tuesday nights at 10pm EST. There are many more moving parts to this show than most TV home reno scenarios. More moving parts and more possibilities.

Four amateur home renovation couples tackle the complete upgrade of four not-so-pretty older houses that were transported by barge and truck to a central spot in downtown Vancouver. Each couple chooses their home without looking inside, and let’s just say that none of these places are palaces. In the end, the winning couple will get to own their renovated home and also have it transplanted to their own new plot of land in downtown Vancouver. It’s quite a prize – but nothing is guaranteed for any of them. 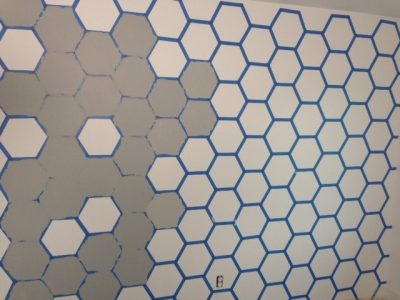 A team of celebrity judges awards weekly prizes to the couple creating the best room reno that week, and the public votes on the overall winner at the end. Each couple lives in their house while they work, and tradespeople are standing by to offer advice and specialized labour as needed. There’s a tool shop on site and paint shop too, plus plenty of mistakes, missteps and friction. These couples are, after all, complete amateurs with tools. Some aren’t all that good when it comes to relationships, either. Although some of the teams lack experience, they make up for it with enthusiasm. Show’s like this usually involve corporate sponsors, and last week’s episode showed one team using ScotchBlue™ Painter’s Tape to create a unique wall pattern. I think it looks pretty good.

Each of the four houses in Game of Homes start off more than a little homely, and that’s part of the attraction. Structurally sound, but well past their prime. Safe, but obviously the victims of bad decorating choices from yesteryear. Promising, but not necessarily free from animal droppings in the attic. The big pay-off for viewers won’t happen until May, when the overall winner is chosen. That’s when we see what all this stress and rough living has turned into.

As reno shows go, Game of Homes involves the usual dose of drama, tension, time constraints and personal conflict. That’s the stock in trade of home reno entertainment. And while you’ve got to wonder how much of what’s captured by the camera might not be so prominent in real life, there is something more subtle that I find interesting.

My favourite thing is the real-world lessons these inexperienced people learn as they tackle the reality of home renovations – a reality that tradespeople handle every day without complaining.

Real home renovations involve mountains of physical work. Sure, there’s the designer side of things, but every successful house is built on a foundation of thousands of hours of just plain hard, dirty labour. This is always daunting to anyone who has never worn a tool belt for a living, and you can see the overwhelment in the four couples. Real renos involve dirt, filth, ugliness and enormous opportunities for becoming a bigger and better version of yourself. Anyone who’s worked in real attics has got to smile when one of the men in Game of Homes says that climbing into the dark, dirty attic of his reno house was the most horrific thing he’s ever done. I’m sure it was, and it’s good to see him being stretched by a reality that could leave him a better man if he handles it properly.

In the end, the biggest renovation successes in Game of Homes might not happen in the houses at all. I don’t know if the cameras will capture it or not, but real home renovations have the potential to deliver bigger, better human beings. Seeing if this happens is one of the things I’ll be looking for in the coming weeks on Game of Homes.