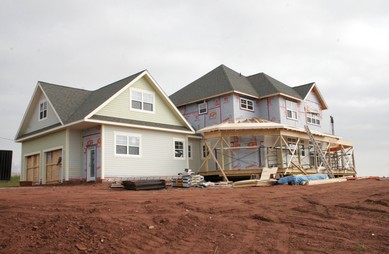 Nobody builds houses in a hurricane. As obvious as this sounds, it leads to a less obvious outcome. What might seem like adequately strong home construction details when the weather’s fine, sometimes proves inadequate when wind and rain get especially energetic. Encouraging the construction of stronger, hurricane proof homes is the philosophy behind the Safer Living Homes campaign, and it’s something you’re going to see more and more often as insurance companies promote improved building techniques and materials to reduce the amount of damage they need to cover financially. Windows blow in during hurricanes, shingles tear off during typhoons and roofs collapse under the weight of unexpected ice storms – in many of these cases, damage could have been avoided or greatly reduced if a few additional construction features had been worked into the design. The specifics of these smarter, stronger construction features is what you’ll get here.

Safer Living Homes are the product of a partnership between the insurance industry and the Institute for Catastrophic Loss Reduction (ICLR). One of the many roles of the ICLR is to identify ways in which property damage and personal injury can be reduced through enhanced hurricane-proof home design and construction practices. Promoting these practices is what Safer Living Homes are all about.

There are at least two Safer Living Homes built in the country where I live, Canada, and more around the continent.  One of these is on Prince Edward Island and the other in Sudbury, Ontario. The aim is to show government and industry that minimum building code standards are not always appropriate, and that it’s possible to build safer more hurricane proof homes right now. One insurance company, The Co-operators, partnered with individual insurance policy holders who’ve had their homes destroyed, offering to rebuild to enhanced ICLR standards at no extra charge. 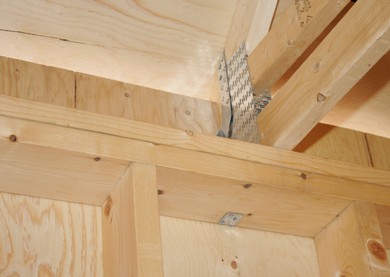 So what’s different about a Safer Living Home? Nothing that you can see in the finished structure, but plenty of important stuff behind the scenes.

Strong winds demolish thousands of homes each year, and this is why many of the Safer Living design features are built to make houses more wind-worthy and to increase the stock of hurricane proof homes. And it all starts at the foundation. Instead of the traditional practice of bolting the bottom layer of framing lumber to the top of concrete foundation walls, Safer Living standards include the use of 1-inch diameter threaded rods that connect with metal plates screwed to wall studs. This combination creates much more vertical strength, enabling homes to resist wind loads that would flatten conventional walls.

If you’ve ever taken a close look at how regular houses are built, you’d probably be surprised to see how roof framing members are attached to the tops of walls. A few 3 1/4-inch-long nails per joint is usually it. And as long as high winds stay within the realm of normal (as defined by what’s happened over the last 50 years), then you’ll usually be fine. Safer Living homes, on the other hand, don’t assume “normal” as it’s been traditionally defined, and that’s why each roof truss is secured with engineered metal hurricane straps. A few hundred dollars of extra hardware and the big bad wolf can blow all he likes. That roof isn’t going anywhere.

Many of the Safer Living design standards originate in the US-based Institute for Business and Home Safety (813-286-3400).Safer Living Homes designed for prairie locations, for instance, include landscaping features that reduce the risks posed by grass fires. West coast variations include engineering to reduce the impact of earthquakes. 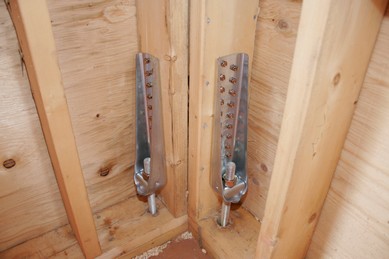 All this sounds great, but how much more does it cost? The Safer Living Home built by The Co-operators in PEI cost 20% more than if ordinary construction methods had been used. And given what you get, that seems pretty reasonable to me for a hurricane proof home, but it gets better.

A good part of these added costs come because specialty materials and fittings had to be found. The 190 km/h windows installed in the PEI home, for instance, weren’t readily available in Canada at the time of construction, though they were manufactured in nearby New Brunswick. Code-surpassing disaster-resistant housing has been built in the US for just 5% to 10% over standard designs now that material supply channels have been identified and opened up. This is huge bargain in my book.

There will always be those pundits who pooh-pooh new ideas out of habit. That’s just the way some people live, and you’ve got to feel sorry for them. But the reason today’s new homes are so much better than they were 50 years ago is because other people saw the trends and reacted. The Safer Living design trend is based on the idea that a hurricane proof home is like having a fence at the top of the cliff instead of an ambulance at the bottom. And who can argue with that?