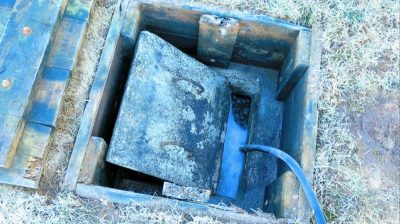 The word “septic” means the absence of oxygen. Septic systems are called “septic” because the digestion that occurs in the tank typically happens in an oxygen-free state. But this doesn’t mean oxygen-free is ideal. An entire industry exists to supply electric-powered air pumps to add oxygen to what would otherwise be an oxygen-free digestion process. Some sewage systems are made to operate with oxygen right from the start, but even ordinary septic tanks can benefit from the addition of air bubbled through the sewage. Cleaner operation and less chances for clogging are the benefits of using an air bubbler in a septic tank. In some cases air bubblers are even capable of fixing clogged leaching beds because they support the growth of oxygen-dependent microbes that eat excess biomat.  Technically speaking, some government authorities frown on the addition of air bubblers to systems not designed for them, but that’s just bureaucracy gone wild. Air bubblers work fine in any septic system with a multi-part tank. There’s an entire industry to support the conversion of ordinary septic tanks to aerated ones. The only reason you wouldn’t want to use a bubbler is because of the expense of buying one and the cost of the electricity to run it. Figure out the cost of operating a bubbler by multiplying the rate of electricity usage by your bubbler, and the cost of electricity where you live. Every 100 watts of electricity consumption, means 2.4 kilowatt-hours of electricity used. The nameplate on every septic bubbler will have a wattage figured shown. If electricity costs 10 cents per kilowatt-hour where you live, then a 200 watt bubbler will cost 48 cents a day to operate, or $14 a month.

Watch the video up next for a tour of how a sewage bubbler works and how to install one.