By: Steve Maxwell
A relative of mine that I admire but never met – my great Uncle Ken – fought in World War I, and on the occasion of Remembrance Day (November 11), I thought you might like to travel back in time with him to hear his words. We have two original letters that Uncle Ken wrote home to his mother, and it’s always a moving thing when I read and re-read them with the kids. Perhaps you’ll find them interesting, too. The second letter below the first came with some pressed, dried flowers that Uncle Ken picked from a garden in France. That’s the man below, later in life, near the lighthouse he kept for many years after the war. 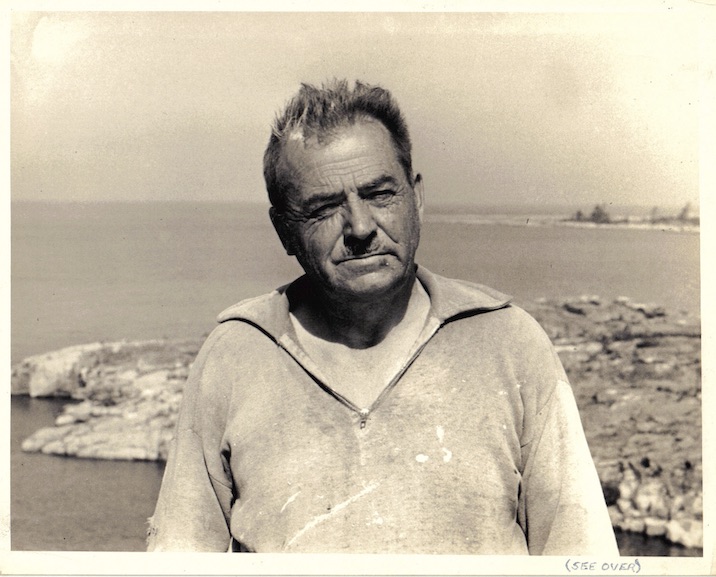 Uncle Ken was one of many young men who got caught up in the orchestrated glamour of war, and he wanted to do the right thing. He originally enlisted in Canada as a Canadian, but when he found out his unit would only be service ceremonial duty in Canada, Uncle Ken went AWOL, jumped on a ship bound for England, and enlisted with the British forces.  He wanted to see action, and he certainly got his fill. He came back a changed man, he never killed a single thing after that (not even flies), he never ate meat again, and he lived to be 88 living in the simple log cabin he built along the shores of Georgian Bay, Canada, a place that eventually became our very modest “cottage”. You can see a painting he did of his cabin home below. 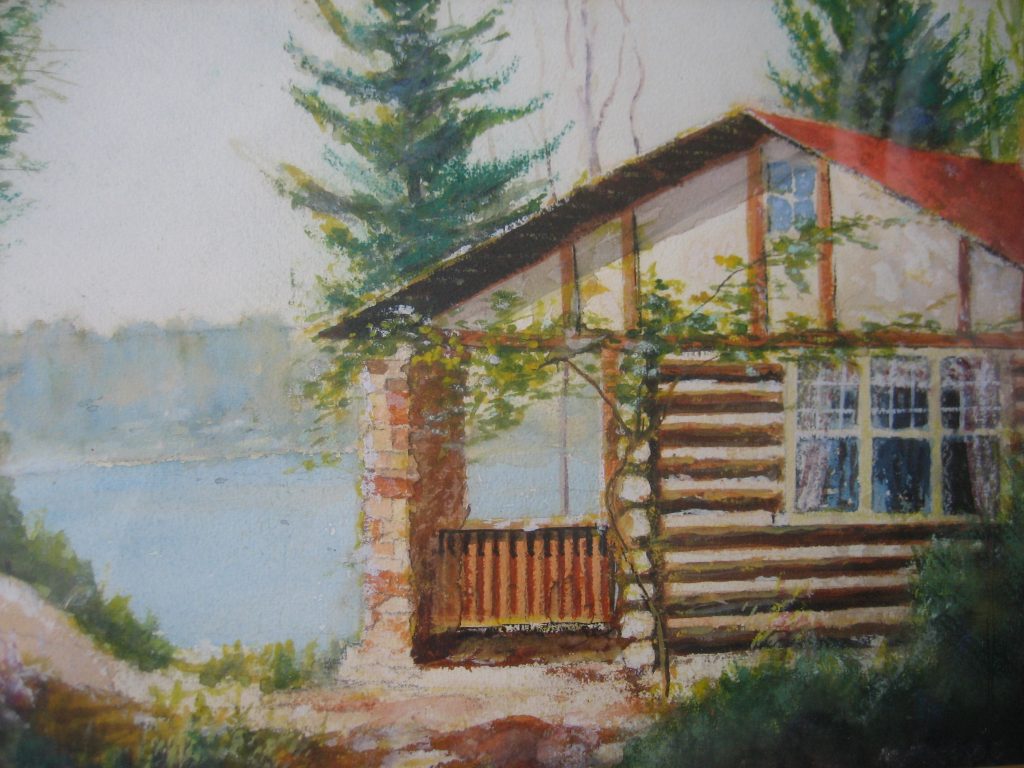 So let’s go back in time and read two of Uncle Ken’s letters – one as he was leaving England to see action for the first time, and a second letter, two years later, after he saw action and was recuperating in a hospital back in England.
++++++++
At Sea
Sat. Sept. 11/15
Dear Mother,
At last after great deal of vexacious fussing we have got on the move and at the present time of writing are about 800 miles on route to the Dardanelles.
It will take about 8 to 10 days further travel before we reach our stepping off place. I am in the best of health & spirits, was inoculated against cholera yesterday – I don’t think there is anything left in the way of diseases that we could be inoculated against.
I suppose you are having the usual beautiful fall weather with the fruit beginning to come in.  Usual basket of peaches from the Exhibition Dad used to bring home.  Strange in this part of England I have been stationed in this last 2 months all the fruit one saw was a scattered apple tree here and there with fruit we would hardly feed the stock with.
Will be nice to be on the move again.  Our ship is the Canadian Northern steamer “Royal George” – a fine boat with comfortable quarters and a fairly good mess – or in plain Canadian the grub is very good.  Left Slandford Wednesday and embarked same day. Ocean has been very calm since we sailed not much rougher than a ferry trip to Toronto Island.
(A whale has just been sighted rocking up to the surface and down again.  Its spouts or blows could be seen quite clearly)
I had some postcard photos taken at Slandford and left instructions for the photographer to forward them to you.  You can dispose of them to suit yourself.
I have not answered H.C.’s letters but will do so when we have passed “The Pillars of Hercules” he talks about.
I hope Ethel and the children are well but I suppose if they have passed the green apple stage of this year they are OK until the same time next year.
It may be that tobacco is very scarce so if you would send me, say, 5 packages of “Old Chum”. You can empty the packages with one heap and pack it in a tin can or box.  Also put in about 10 packages of cigarette papers – for rolling the tobacco in.
The address –
OS  K.M. Evans Z1677
Hawke Batt.
Meditarean Expeditionary Force
Well dear mother, this post closes in 10 minutes time so I will have to close.
I hope you will all keep well and so. Good Bye to all.
Your loving son,
Kenneth
++++++++
And two years later, after seeing action . . .
London Oct. 27, 1917
Dear Mother – As you will perceive by the heading I am back in England again, and able to sit up as usual and take a little nourishment. I am feeling fine and fit after the stunt I was in and got 3 shrapnel hits, but it was only what is known in the army as a blighty one – that is just severe enough to send you back to England to get fixed up.
It was a grand affair – we sat under the edge of a 48 hr. bombardment with Fritz searching for us with high explosive & shrapnel & gas because he knew we were coming as the prisoners stated afterwards. My platoon was buried and we got them dug out in time to go over at 5:40 a.m. Friday last. It rained cats & dogs and we waded through mud & water to our waists. About 20 minutes after we set off behind our barrage which was immense – churning up the ground about 50 yards ahead of us in high spouts of mud and clay. The concussions shook the life out of one. I collected some of a shrapnel burst, one in the left side of the face – another left hand, one in the left leg. I revived in about 5 minutes and after a drink of shell hole water, carried on after the platoon. We reached our objective after taking 3 fire boxes in our sector and about 9:00 a.m. got dug in. Feeling weak and queer in the head I left for the rear & walked 6 kilometres or about 4 miles to the dressing station, with old Fritz pounding the rear all the way to prevent reinforcements coming up. I passed the stretcher bearers bringing back the wounded on the duck boards in the open – and dozens of them were being blown up by the shelling. They didn’t appear to be taking any notice of it and I felt so rotten I didn’t care a hang myself. I don’t want you to feel anxious because I am all right as you will see. I couldn’t have got along for 4 hours after being hit if I had been badly smashed. I shall be out likely in 6 weeks. The leg is the worst – went in at the thigh and out at the knee – but as the CO says, he doesn’t know how I carried on at all with it. Well, best love to all and write soon.
My address is O.A.M. Hospital, Mill Bank, London.
Your loving son,
Kenneth

I hope you found this glimpse of the past worth reading. Please consider helping me cover the cost of creating content and keeping this website up and running with a newsletter each week. Click the “buy me a coffee” button below and you’ll have a completely safe, simple and fast way to make a contribution. Thank you very much for your support!
Tweet
Share
Share
Pin1
1 Shares
Your subscription could not be saved. Please try again.
Your subscription has been successful.