One thing about being a parent is that it expands how you experience the world. Not only do you feel the ups and downs of your own life, but you also  feel the ups and downs of your kids. At least that’s the way with me. It’s like you have more than one heart. In my case, I have 5 hearts in addition to my own, and I’m hurting with one of these others. 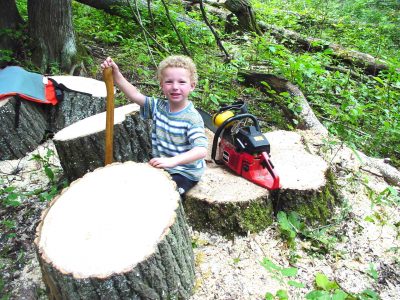 My son Joseph’s life is very much a product of the homestead we started in 1985. Here he is in September 2001 when we were out together cutting firewood. Joseph is 17 now and he’s always been super athletic. Four years ago he got serious about shot put and discus, so we poured some concrete throwing pads in one of our fields. Shot put needs a 7 foot diameter circle and discus 8 feet. I really wish the people who set sports standards had made them the same. 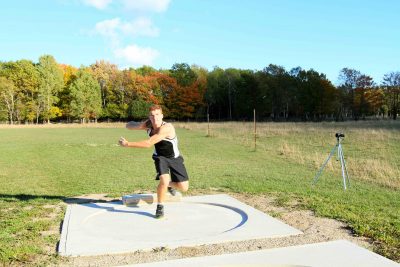 You never know what your kids will latch on to, so my policy is to always support them in wholesome interests whenever I can. If nothing else, pouring concrete throwing pads would be a good father-and-son activity. Maybe it would be a waste. You never know . . . 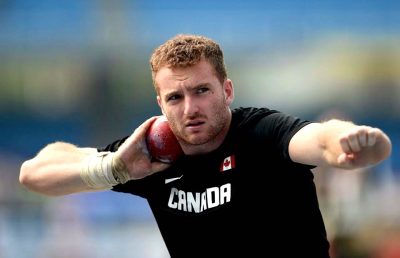 Fast-forward to 2015 and those pads have really done their job.  Joseph holds the Canadian shot put record for under-18, he’s represented Canada in international competitions and he’s got his heart set on something big. Here he is throwing for Canada this past summer in Cali, Columbia. He came in sixth, which I think is great. Joe was devastated. He’s never won anything but gold here in Canada. 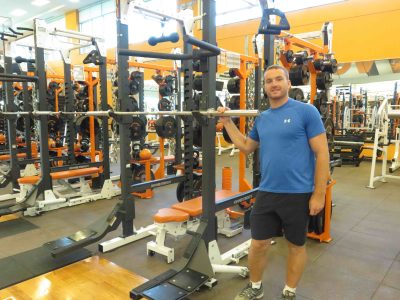 Joe has always dreamed about going to a US university to study business on a sports scholarship. And he does have universities offering him options. So Mary and I and Joseph took a road trip back in September to visit three US schools. One really stood out.  The University of Tennessee in Knoxville. Joe fell in love with the campus, the coach and the other throwers completely. Here he is in the gym at Tennessee. They were offering a full (or nearly full) scholarship, too – 50% athletic funding and 50% academic based on the marks Joe’s been getting home schooling with an Ontario government correspondence high school curriculum. Then everything changed.

Some of the hardest falls happen after we’re flying the highest. That’s what happened when we learned that Tennessee only offers academic scholarships to US students. No foreigners.  Attending this school would cost us about $30,000 per year, and that’s just too far out of reach.

As life’s hardships go, this isn’t that big. In fact, it’s embarrassingly small consider the kind of things that are happening around the world. There are other US schools and most have no rules against foreigners. But for Joe, this issue has been huge. He’s a focussed and loyal guy, and we left his heart in Tennessee as we drove north from the Smokey Mountains to come back to Manitoulin. Joe’s looking at other options that offer scholarships, and I’m sure he’ll realize his dream one way or another. And even though my 52 years have taught me to roll with punches much larger than this one, it’s different when you’re 17. Like I said before, being a parent is like having more than one heart . . . 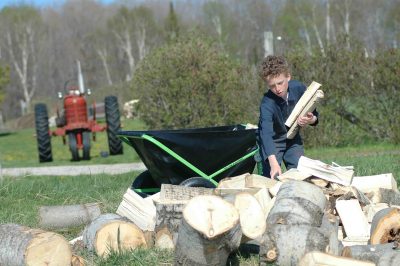 One thing I’m sure of, though. Joseph would never have had the time or situation to get as far as he did in the world of throwing without those throwing pads we poured right in our pasture all those years ago. A few steps from the house, next to a herd of beef cattle, Joseph has been building his life his own way. Thousands of hours out there, throwing tens of thousands of times. He’s worn the concrete smooth. I often think what would have happened to my kids if we’d never had have our precious land.

Yesterday I told you about the work Robert and I are doing scrambling to get his septic system installed before winter, and today I want to show you the system of drain lines we’ve installed underneath his cabin home. There’s not enough soil for a basement on his site (bedrock is about 12” below the surface), so we’ve done some innovations to make a frost proof water supply and drain system. Watch my under-the-cabin video tour here: