I’ve come to realize that the ability to laugh is the most valuable home improvement skill of all, especially when you’re laughing at yourself.  I was reminded of this when I left the city in 1986 to create a home and life on rural Manitoulin Island, Ontario. The source of the laughter was an outhouse gone bad and a neighbour coming around to say hello for the first time. 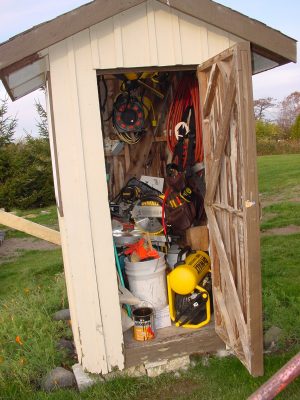 There was no house or buildings on my property when I bought it, and living in a tent with a hole-in-the-ground bathroom helped me appreciate toilets like never before. The ramifications of a stomach flu one rainy night helped moved the construction of an outhouse to the top of my to-do list. How hard could it be to build one? An outhouse is just a small roof and four walls over a toilet seat over a hole in the ground. I already had the hole. That’s the outhouse to the left, in use as a temporary tool shed.

The fact is, holes in the ground seem simple enough, but they’re tricky. The hole under my outhouse performed perfectly that first summer, and this success lulled me into a sense of complacency. Never having lived with a hole in the ground over the long haul, I didn’t realize the mischief they can inflict.

At that stage in my life I worked building my Manitoulin house each spring, summer and fall, then back to the city to live as cheaply as possible during winter,  earning money for the next building year. Arriving back on Manitoulin for a fresh season of work in 1987, the outhouse look tilted. Was it my imagination? No. The clay soil underneath that had been so firm and trustworthy as I dug it the previous summer was now a soupy porridge of collapsed dirt, spring run-off and “substances” of the kind you’d expect to find in any experienced outhouse hole.

The thing about learning to build is that the lessons are often delivered harshly, like orders from an angry drill sergeant. “Dig out that outhouse hole, private! Fix that hole so it won’t collapse again, you idiot!” My work began by dismantling the seat structure of the outhouse so I could use a shovel to empty out the porridge. Distasteful work, but sooner or later this is an expected part of outhouse ownership. What goes in must eventually come out. The question was what to do to stop further collapse of the hole.

I flirted with the hope that the hole might not get bigger, but that was foolish. It might be fine if the summer was dry, but another winter and the outhouse would fall on its side or worse. The hole was clean now (really, it was), so I worked upside down through the floor using rocks and mortar to build a circular stone foundation to keep the soil at bay.  The experience was kind of like diving for pearls except in reverse. I’d grab a few rocks and mortar, lower these down into the hole, then dive down with my legs and waist on the floor of the outhouse and the top half of my body below ground level. Ten minutes of working upside down would use up my supply of stone and mortar, then I’d return to the surface for more.

The thing about a young city guy moving to the country is that it attracts the attention of everyone in the area. I was the first person to build anything new on my dead-end road since 1953, so a farmer named Weldon came to see what was going on. I can only guess what went through Weldon’s mind as he stood there for 10 minutes, watching his new city neighbour with his head and body down in an outhouse hole, legs flailing around up above.  One thing’s for sure. Mutual laughter is a great way to meet someone new, especially when it involves coming up out of an outhouse hole gone bad.