More than one old-timer I know tells how new carpenters used to be judged on the job by their carpentry skill building a sawhorse. If they could deal successfully with the required angles and joints of a sawhorse, creating something solid and useful for the rest of the crew to use and scrutinize, then they could probably frame a roof or put together a wall. Back then sawhorses were four-legged wooden resumes.

But as building sites have become more plug-and-play propositions, site-built sawhorses have pretty much taken a back seat to ready-made alternatives. Sawhorses are still useful, though far less essential than they used to be. That’s too bad in one way, though who can argue that tradition should stand in the way of efficiency-boosting change? Here’s a look at two portable workstations that have earned a place in my life. 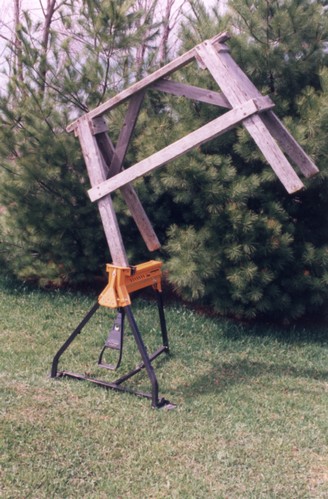 The 45 lbs. Super Jaws has no trouble supporting this TK solidly. Despite unbalanced loads like this one, the three-legged design remains stable on uneven surfaces. That makes it useful for planing doors, supporting stationary machines bolted to interchangeable wooden bases, and for cutting materials with hand-held saws. I’ve also used the Super Jaws successfully for metal fabrication and welding. With practice you can fold the unit up in about half a minute when you’re done work. The yellow and brown epoxy-powder coating is tougher than paint, and the corrosion-resistant nuts and bolts really are rust-proof.

Clamping action happens via a foot-operated pedal that works through a mechanism generating anything from light pressure to more than 2000 lbs. of clamping force at the urethane-padded jaw faces. Operation is faster than thread-driven mechanisms, with jaws locking automatically as foot-pressure is released. I did have some mechanical trouble with the locking system on my Super Jaws, but repaired it easily on-site with a centre-punch and hammer. Besides the fact that the jaws open as wide as 35 inches, operation of the tool is quick and easy because the design makes use of both the upper and lower body, something no other workstation I’ve seen does as well. 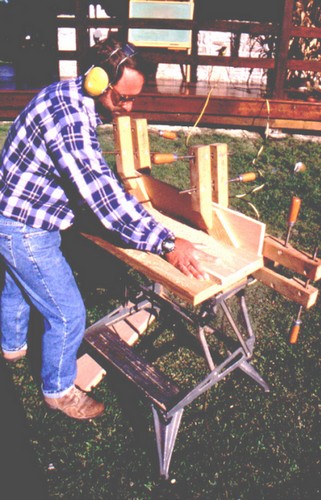 No router reaches full potential unless it can be fitted into a table for operations like milling molding, rounding the edges of small parts, and cutting dado and rabbet grooves. But full-size router tables are heavy and awkward to transport. That’s why you don’t see them very often on job sites, even though they do boost the quality of work. And solving the work site router table challenge is where the Workmate shines. This ready-made folding workstation provides legs for a shop-built router table top that rivals the best you can buy. Everything folds flat for handy transport, yet unfolds quickly to create a solid, full-size router table. This system is ideal for use with the new breed of cordless routers that have just hit the market.

A double-layer of 3/4-inch birch ply makes a great router table top, especially when it’s edged with hardwood. It’s hefty enough to be solid, and thick enough to secure the 3/4-inch diameter anchor dowels set in to the bottom face. These dowels extend downwards and interlock with holes in the Workmate top, securing the router table surface by tightening or loosening the jaws. A phenolic base plate sits in rabbet grooves in the table top, with the router suspended from it. Since gravity holds the machine in place, just lift the router out whenever you want to use it free-hand. I hardly ever remove the over-sized router table base plate since it’s a least as handy as the stock plate.