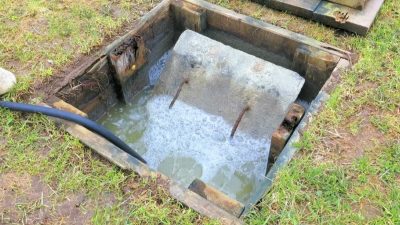 Q: Is there something easier than a full rebuilt to get my sluggish, 40-year-old septic system working properly? I know you’ve written about using an additive called Septicleanse. Is there some way to restore performance without digging?

A: The short answer is yes, but I need to tell you the story behind how I came to that answer.

Back in 2012, I wrote about using Septicleanse in my 25 year old septic system, and though the product did help initially, even after three Septicleanse treatments the system still wasn’t working properly after nearly two years. That’s when I decided to do more research. I’ve since discovered a generic approach to fixing lazy septic systems that has restored almost like-new performance in about 3 weeks, all without digging. It has to do with aeration of the second half of the tank and pressure washing the inside of the pipes in the drainage field.

Normally, septic systems operate without oxygen (that’s what the word “septic” means), but companies now sell air pumps and bubblers that allow air to be bubbled through the sewage, changing it from an oxygen-free environment to an oxygen-rich one. The theory is that oxygen-type bacteria breakdown the sludge and slime that ordinarily clog the system in time, allowing it to flow freely again.

Rather than buy a bubbler system at a cost of $1000 to $1800, I found a supply of air bubble tubing online from a Canadian supplier (www.canadianpond.ca) and hooked up 15 feet of it to my workshop air compressor as a test. In three weeks the sewage levels in my tank went from as high as 10 inches above the top of the tank during heavy use, to 8 inches below the underside of the tank – just like it’s supposed to be. This is the first time this has happened in 3 years, so I was really happy. Since the approach proved itself, I installed a proper air pump, rather than continue to use my air compressor.

Although results were good, sometimes sewage levels in the tank rose higher than it should. Not as high as before, but it did rise after washing machine use and showers. That’s why I decided to try something called “jetting”.

I found a tool called Clog Hog and this made the whole operation possible. It’s a flexible attachment that fastens to the wand of a pressure washer, allowing the inside of pipes to be cleaned with a lot of vigour. And boy, did it work well. I jetted the pipes in June 2014 and the sewage level in the tank has never risen even slightly beyond normal since then. Is it a permanent fix? Probably, but time will tell.

In the mean time, here’s a video showing how the jetting process works. Just be warned, this footage is not for the faint of heart!