When I grew up in the suburbs of Toronto, Canada in the early 1970s, only one family in a neighbourhood of thousands of people had an air conditioner, and that little novelty only cooled one small bedroom. The rest of us – almost every other family in the town, in fact – made use of old-time, A/C-free options for keeping cool. You can still do the same today, but you’ve also got a modern, grid-free option that didn’t even exist years ago.

“Ah!”, you say, “summers are so much hotter now than they used to be. It’s insane to try and live without A/C these days.”

Actually, that’s not true. Summers aren’t hotter, despite what you hear about climate change. Click here to see “extreme temperatures in Canada” on Wikipedia, and you’ll see the majority of maximum temperatures were set in the first half of the 1900s. Only two record highs out of the 60 happened after 2000, with 43 of the hottest Canadian days being recorded before 1962.

Clearly, our dependency on air conditioning has nothing to do with hotter summers, and more to do with a rather one-sided expectation for constant comfort. Our ancestors knew how to keep cool without going broke, and they didn’t even have the best non-grid method of cooling that we enjoy now: openable skylights.

The Real Reason Your House is So Hot

Most houses are much hotter than they need to be in the summer because they trap hot air in upper levels. Opening windows doesn’t work that well because so much interior volume of your house exists above the highest windows. This traps a hot bubble of air, especially in second floor bedrooms. Most central air systems can’t even come close to beating the heat up there, even when they make lower levels way too cold.

Isn’t there something particularly infuriating about sweating in your bed while your central air over-cools the basement? Just get rid of that hot air bubble upstairs and you’ll be both cooler and richer. 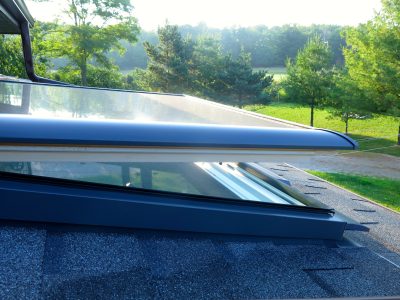 Openable skylights installed through the highest ceilings of a home are so effective at cooling the entire house that I figure they should be made mandatory in the building code. Pop them open along with some windows on lower floors when the cool of the night comes on, and you’ll immediately feel air moving up from lower levels to upper ones. In less than 30 minutes your home will be as cool as the outside air. And when this is still too hot for comfort, leaving skylights open an inch or two allows cool, air conditioned air to make it’s way upstairs as the hot air bubble is allowed to escape.

“Finally! My A/C works upstairs!” is a rejoice that I hear a lot from homeowners who install openable skylights to boost air conditioning.

The most effective skylights I’ve tested so far are electrically operated and they also close automatically after the first drop of rain. Wiring is the only troublesome issue in a retrofit situation, and that’s why solar skylights make sense.

VELUX (www.velux.ca) is currently the only skylight company offering self-powered solar skylights, and these models have performed perfectly in field trials I began in early 2013. A built-in photovoltaic panel keeps an on-board battery charged, allowing the skylight to be opened and closed from anywhere in your house using a hand-held remote. You can also preset the skylight or blinds to open and close on a schedule. No need to tear up drywall to run wires, and no need to feel yourself going broke as you sweat in your bed while your air conditioner is running a marathon all night.

Like I said, summer comfort is certainly possible without massive air conditioning, quite apart from the fact that our summers really aren’t as hot as we’ve been led to believe. Click below to see how simple, openable, solar skylights get installed.