Lilacs are one of my favourite shrubs, precisely because their blooms are so beautiful and so short lived. The lilac hedge I began establishing in the mid-1990s has also reminded me about the importance of long-term perseverance and details. All the photos here are of the hedge at my place. Each original transplant I put into the ground was about the size of a new pencil. 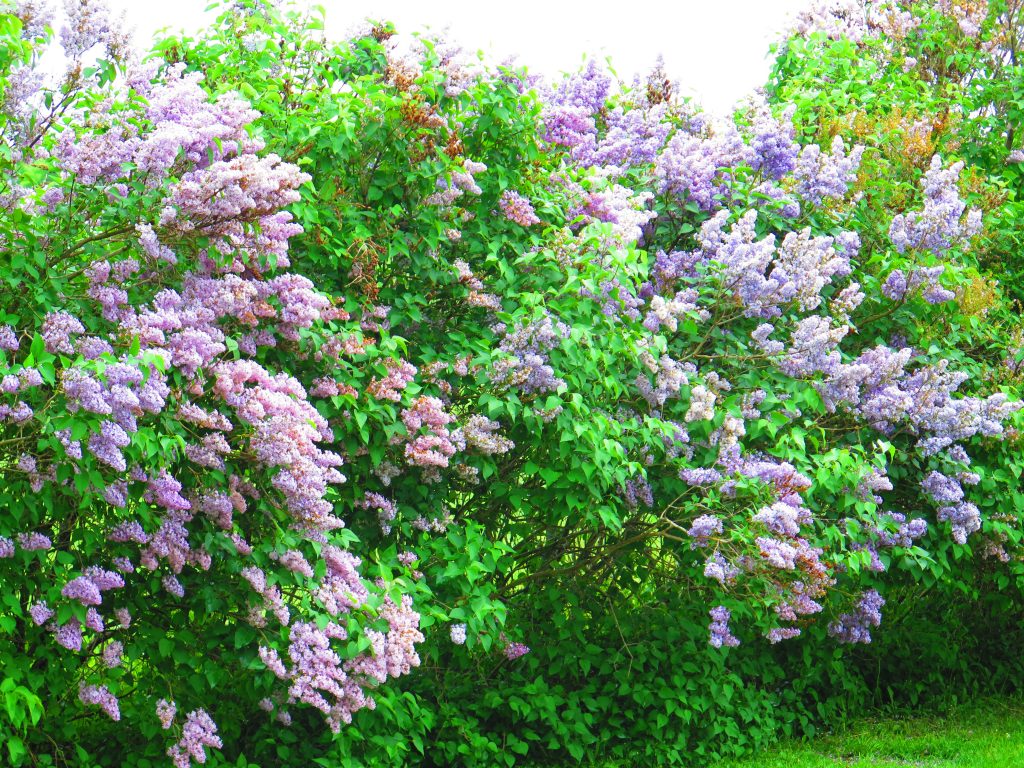 Where I live in Canada, the peak of lilac blooms usually happens during the first week of June. Our spring has been quite cool and slow this  year (2022), so maybe the blooms will peak a week later. A week after peak and the blooms are beginning to fade. No one ever gets tired of lilacs in bloom because the colour and fragrance don’t last long enough to wear out their welcome. All this is why I planted a 300 yard long lilac hedge at my place over a period of three years beginning in 1995. That said, it’s only last summer that I solved a recurring problem I’ve been having all along with some of the plants. Even if you never intend to grow lilacs, there’s a lesson to be learned here. 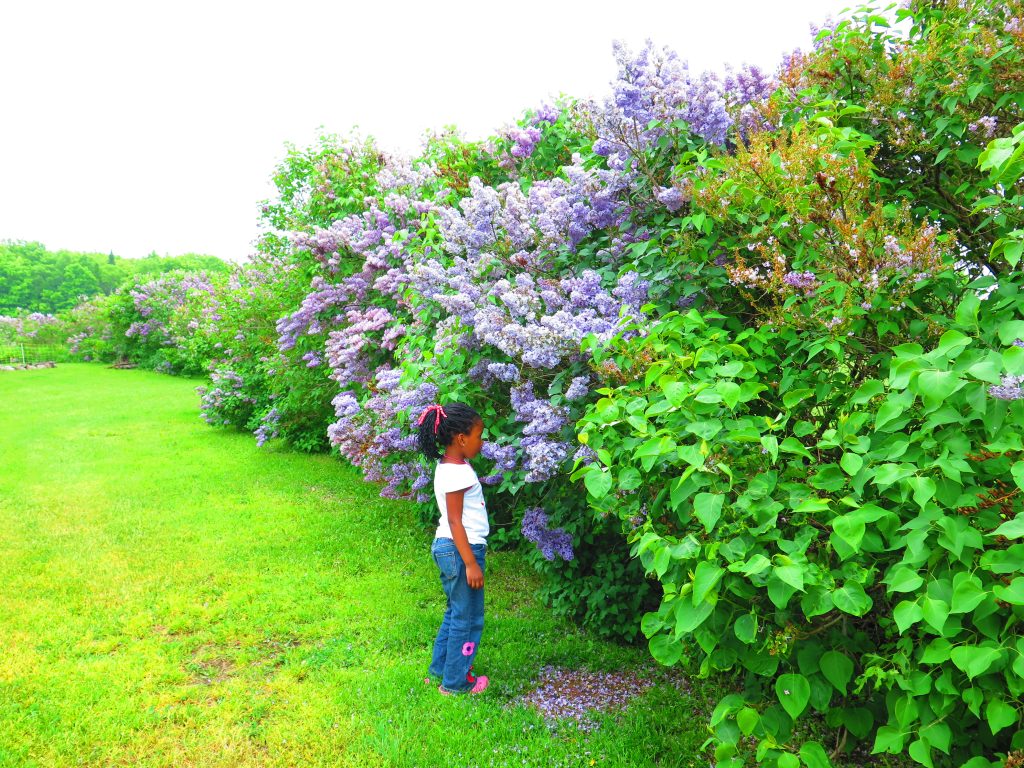 Lilacs are hardy plants. They seem to grow like weeds, so I was surprised when particular sections of the hedge failed to thrive. Most of the hedge was fine, but a couple of sections totalling 75 yards had lilacs that grew slowly for a few years, then failed and died. Eventually, after years of struggling, all lilac bushes in these weak areas were dead, and the symptoms were always the same. Reasonable spring growth occurred, but then a weakening and yellowing of leaves as July rolled around. Despite lots of water during dry times of the year, these plants typically died over winter.

I replanted these troublesome sections twice, with mostly the same results over a period of years. Could there be nematodes in the soil sapping the life of these plants? Nematodes are small, soil-borne creatures that infect and deplete specific plants. No, testing for nematodes came back negative. Could it be that the soil in these areas was just too heavy clay for lilacs to thrive? Probably not, since the thriving sections of my hedge were in the same kind of soil. Now, 20+ years later, I believe I’ve solved the mystery of the failing lilacs.  The problem turned out to be something I never imagined. A couple of things, actually. 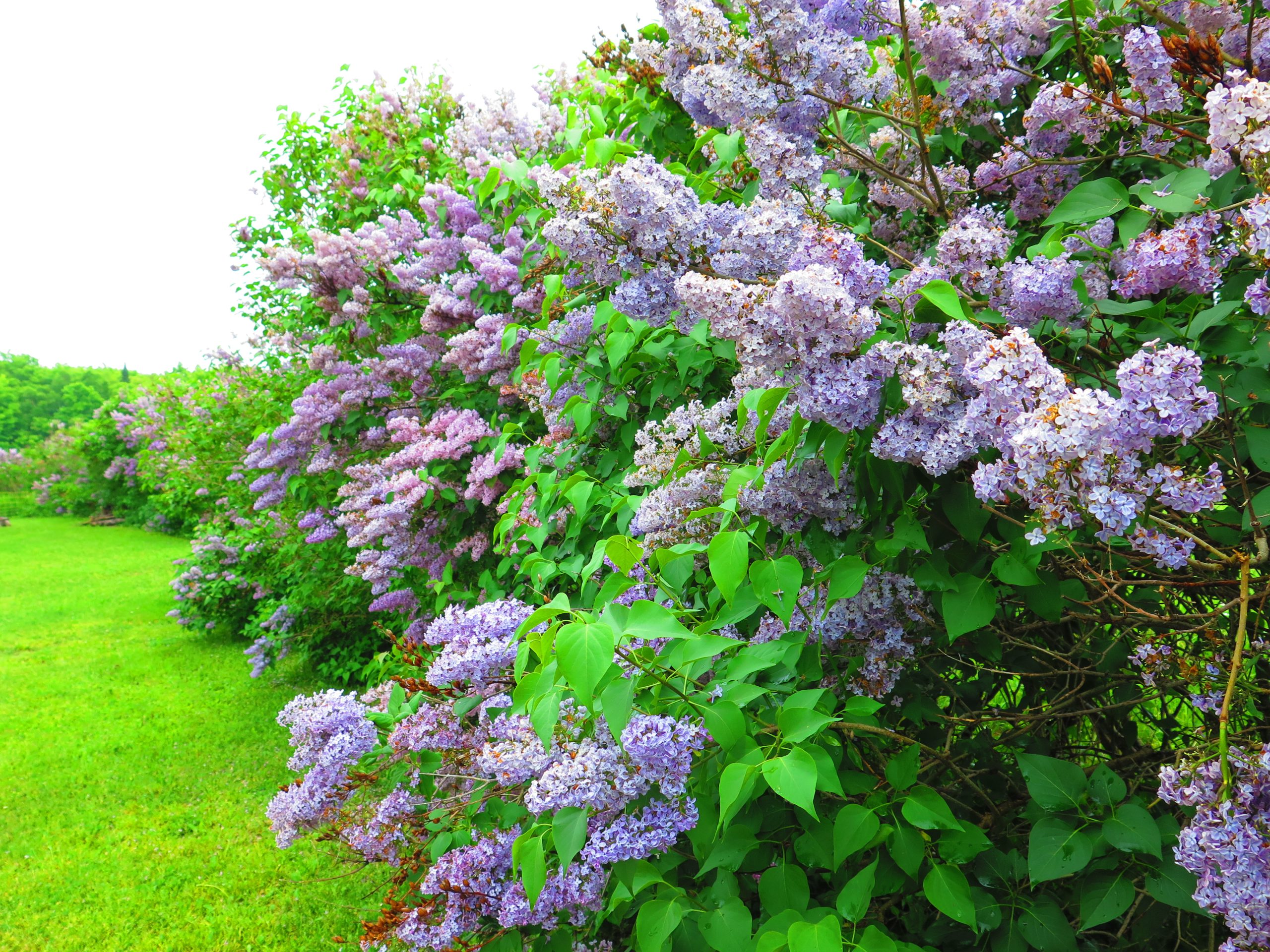 Over the years I’d applied a weak solution of water soluble fertilizer to my lilacs as I irrigated them, and I figured this was enough to bring nutrient levels up if there had been any deficiencies. But having exhausted all my options for dealing with these weak and dying lilacs, I did a soil macro nutrient test. I should have done this earlier because nutrients were low, though not much different between the healthy and poor sections of hedge.

Potassium registered especially low in the soil tests, and phosphorus wasn’t anything to brag about, either. That’s why I started applying 6-24-24 granular fertilizer by hand in spring, and another application in the fall. The difference was noticeable, but the die-back continued. Good growth in spring was always followed by weakening and yellowing over the summer. Weak bushes would begin dropping leaves in early September while most other sections in my lilac hedge grew big and green and vibrantly.

“You might have a micronutrient deficiency”, explained my friend Birgit. She’s a trained agronomist and though she’s never consulted on a crop of lilacs, I decided to look into her suggestion. Micronutrients are elements that need to be present in tiny quantities for some plants to thrive.  Certain plants are more susceptible to micronutrient deficiencies than others, so I did some research. Online I found examples of yellow leaves on lilacs and failure to thrive when manganese is low. This was a new idea to me and it looked like a winner. I did another test, this time including micronutrient analysis. Sure enough, manganese was definitely on the low side in areas with dying lilacs, and higher in areas with thriving lilacs.

The next spring, Birgit supplied me with some granular manganese fertilizer and a liquid I could spray onto the leaves after diluting with water. Do you ever feel a high level of enthusiasm when you think you’ve found the cause of a recurring problem? I sure do, and that’s how I felt when the lilacs seemed to be more vigorous after the manganese treatment. Seemed to be, but the vigour didn’t last. Come September of 2017, the weak lilacs were looking weak again. Not as weak as before, but still not thriving everywhere. Some were still dying.

It’s sometimes difficult to decide when to stop trying to solve a problem, but I knew I wasn’t ready to give up yet. Birgit suggested another soil sample for micronutrient testing, but this test would be different. One sample was from a thriving part of the hedge and another from a failing part. The crazy thing is, results of the two samples looked pretty much the same. Manganese was much higher now than it was the last time (because of the granular and foliar manganese I’d added), but the two samples were disappointingly similar. The poor areas of lilac actually had a couple of better nutrient levels than the thriving parts of the hedge. One thing was different, however, one small thing.

Iron was a little lower in the poor section than the thriving areas. Not much lower, but it did show up as a yellow alert on the soil test results graph. That’s what you can see below. But then again, so did other elements. Just the same, iron was really the only straw I had to grasp since it was the only small difference between the thriving lilacs and dying ones. Birgit recommended a lawn fertilizer with extra iron, normally meant for making grass greener. I wasn’t interested in greening things, the fertilizer was just a handy source of iron. Would it be enough? I just wanted lilacs that grew like they were supposed to. I spread, waited and watched my lilacs this past growing season. 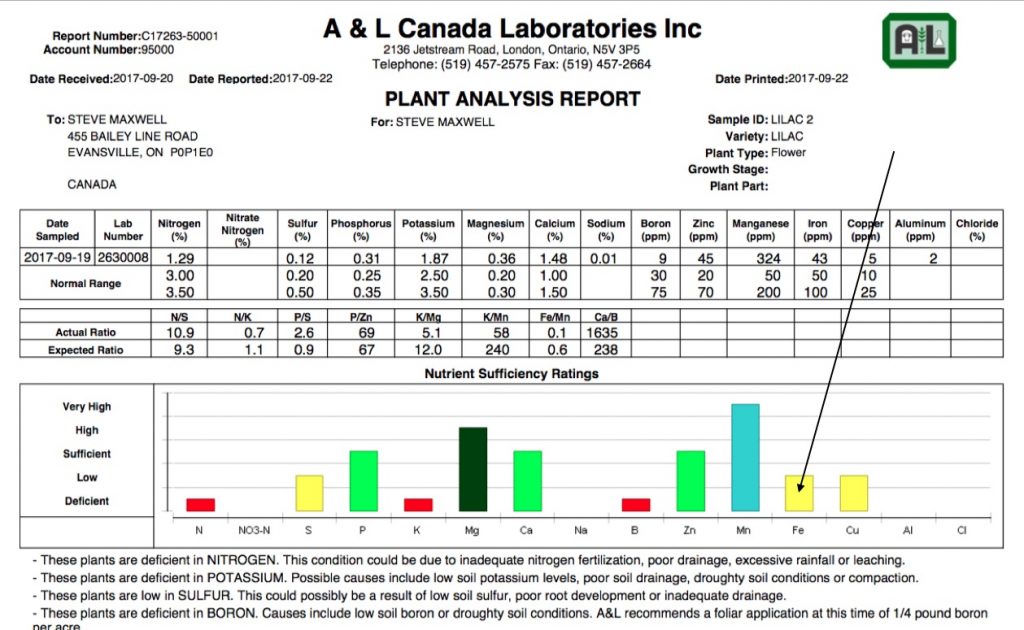 Enough time has passed that I can say for sure that the areas that only grew sickly lilacs are now every bit as vigorous as everywhere else. They look better this spring than they ever have before, though of course they’re much smaller than areas that have been thriving for nearly 30 years. Much better. I know how that I’ve got the mystery solved, and it has reminded me of something vital that applies to many areas of life.

Sometimes very little things in life can make big differences – all the difference in the world, in fact. And sometimes extreme perseverance is the only way to bumble our way through life’s challenges, bumbling because we can’t usually see all the real causes of problems clearly. If only we could see more clearly, identify problems for what they really are, then tackle them head on. Wouldn’t it be so much easier to live if we didn’t have to deal with partial ignorance?

I hope you found this article useful. Please consider helping me cover the cost of writing and publishing content like this. Click the “buy me a coffee” button below and it’ll take you to a fast, easy and simple way to contribute. Thank you very much for doing your part to help keep this site up and running!