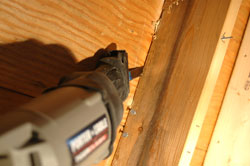 If your New Year’s resolutions include tackling a serious home improvement project, then you’ll probably need to know how to take down unwanted walls. The work might be simple or it could be complicated. Your reality hinges on whether or not the walls carry an important part of your home’s structural load.

Supporting walls carry crucial floor or roof loads from above, and that’s why they’re so important. Almost all exterior walls are load-bearing, but so are some interior ones. That’s why you’ll need to do some detective work and check before you remove anything. You can’t simply remove a load-bearing wall without unfortunate side effects.

Is the wall supported by a beam or foundation wall directly underneath? If so, it’s load-bearing. Is the partition oriented perpendicular to the joists or the roof rafters above? If so, the wall is very likely load-bearing. If there’s any doubt at all about the structural status of a wall, call in a contractor or engineer. Whether the wall is just for show or it’s holding the roof up, a pro can give you the site-specific advice you need to create a safe action plan.

Wires and pipes pose another potential challenge. If either of these run through the condemned wall, then you’ll need to call an electrician or plumber to disconnect them before the fun starts. And just because you can’t see a faucet or electrical outlet on the wall surface itself doesn’t mean the wall is wire or pipe-free. Check inside by cutting away some panelling or drywall from floor to ceiling at each end of the wall. Also, check in the basement and the attic for wires or pipes entering the wall cavity from above or below.

If the wall is definitely not load-bearing, and it’s wire and pipe-free (or these have been safely disconnected), begin by removing all the panelling or drywall.

With the frame of the wall exposed, it’s time to slice the top and bottom members vertically, into five- or six-foot-long sections. A reciprocating saw is the only tool worth considering for this job. 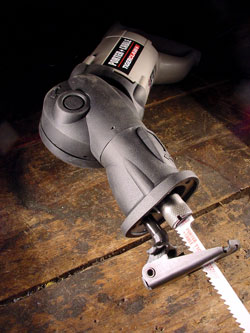 Reciprocating saws make quick, rough cuts. Like a jigsaw on steroids, their big, hungry blades push and pull their way through wood, plastic, nails, metal pipes, plaster and screws. The fastest-cutting models move their blades in a D-shaped, orbital pattern, instead of just back and forth. Orbital blade action is a real advantage when you’ve got tiring, overhead cuts to complete as you take down a wall. Reciprocating saws come in both corded and cordless models, and all brands accept blades with the same universal mounting shanks.

Your goal is to break the wall up into manageable chunks, but while it’s still attached to the floor or ceiling and stabilized. Slice one wall stud near the top and bottom, remove it, then move on to the next one. When all the studs have been removed, slice the joint where the wall plates join the ceiling frame and the floor, using a reciprocating saw fitted with a metal-tolerant blade. The idea is to sever most of the nails or screws securing these parts by sneaking into the joint between pieces of wood, thereby minimizing the amount of bashing and prying needed to remove pieces one at a time. Depending on the thickness of your wall and the length of your recip saw blade, you might have to attack the joints from both sides of the wall to cut the fasteners anchoring each section of top and bottom plate. Whatever you do, wear safety glasses throughout the entire job.

Take a little time to pull out old nails and you’ll end up salvaging some half-decent lumber while also opening up the old place to a whole new look. There’s nothing like a New Year for creating a fresh start.