A number of years ago I was asked to testify in a lawsuit involving a father who fell off a ladder building a shed for his adult son. This man was suing his son for not providing a safe working situation. “What would have been safer than the step ladder the father was provided with?”, I was asked as part of the court proceedings. Despite the fact that this man willingly and knowingly stepped onto the ladder – and I personally figure he shouldn’t expect an insurance company to take responsibility for his broken bones – I had to admit that some kind of scaffolding, however small, is always much safer to work from than a ladder. Scaffolding almost certainly would have prevented the father from falling. The problem with scaffolding is that it’s big to store and few homeowners use if often enough to justify. Creating a safer and more versatile system than ladders is what a Canadian company has set out to do. 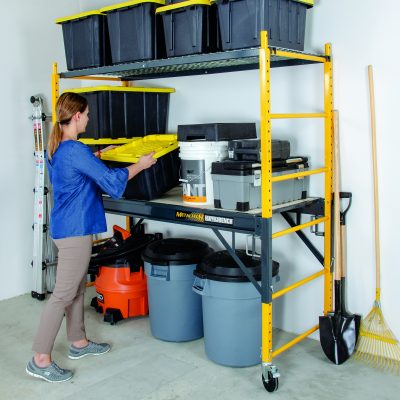 Metaltech makes industrial scaffolding in their Laval, Quebec plant and I’ve bought lots of their products over the years. This past fall they launched what they call a Scaffold Bench. It caught my eye because it makes a lot of sense for homeowners who don’t like falling off ladders. When the Scaffold Bench isn’t providing a safe platform for doing elevated jobs around the house and yard, it functions as a rolling workbench. Need storage in your garage? This unit also comes with wire shelves that easily lift on and off the structure. This is one reason it’s more versatile than ordinary scaffolding.

Imagine a 6 foot-long scaffold frame on wheels. A special platform provides a work surface on one side, and a quick-release system for holding a chopsaw to the platform on the other. There are also adjustable outfeed rollers that provide support for long items being cut and the whole thing rolls on large, lockable casters that work better than I expected over less than smooth outdoor surfaces. 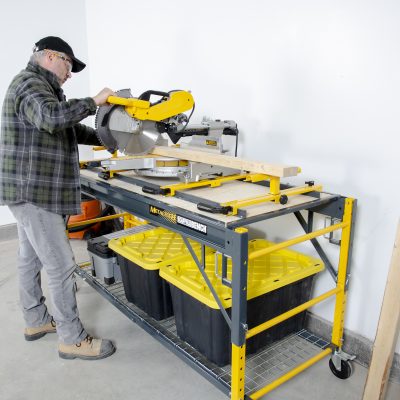 Assembling the Scaffold Bench took me an hour in my driveway. The fit of all parts was good and the engineering is strong. My only concern with the design is the plywood used for the platform. It looks like indoor-grade material and the veneer was bubbling a bit and coming loose as I took it out of the box. Not a big deal, but I did notice it. I’m thinking that some exterior grade plywood is a good idea for the platform.

The Scaffold Bench is light enough that two people can easily lift it. Rolling is a one-person job.  If you’ve never worked from scaffolding before, you’re in for a treat, even on relatively low situations. Besides being safer, it’s easy to be more productive, too. There’s room for your tools and you don’t have to be climbing down and moving your setup frequently, as you do with a ladder. Safety and efficiency are the reasons I rarely work from a ladder if I can help it.

The basic Metaltech Scaffold Bench kit I’m using costs $380 in Canada from Home Depot.ca, and the same thing is $289 in the US from Home Depot.com, but I suspect most homeowners would want additional accessories. The most important ones in my book are more wire shelves. The real genius of the product is the fact that it can be used as more than just a safe work platform. Most of the time, for most people, the unit will probably sit in the garage acting as a shelving unit, holding the kind of stuff that typically clutters garage floors. The basic kit comes with one shelf, but the frames can easily accommodate more. Another accessory that caught my eye is the tool shelf. It hangs off one of the frames and provides a surface to hold tools and supplies. All in all, I think the unique Scaffold Bench makes good sense.

Click below to watch me unboxing and assembling the Scaffold Bench, beginning at 0:35 minutes of the video.