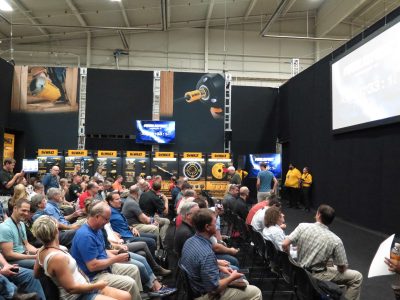 From time to time tool companies invite people like me to corporate events where new tools will be unveiled. I usually turn these down because I don’t like leaving my Manitoulin Island home unless I have to, but every so often I say yes. My latest “yes” answer is what had me sitting in a decked-out airplane hanger in Baltimore this past Tuesday, watching a large video screen counting down to the moment when DEWALT would unveil some secret new tools in their “World’s First” campaign. You can see the venue there to the left, just before the unveiling.

I was there with 90 other tool people from across North America, and the whole thing really was pretty secret. The internet was completely free of any leaked information on what would happen, and we were driven to the unmarked venue in black, stretch passenger vans. All I’d heard a few days earlier was one word-of-mouth hint that DEWALT was launching some kind of 60 volt cordless tools. And I have to admit, I wasn’t impressed with the idea. After all, I’ve never found 18 volt or 20 volt cordless tools lacking in power. Did the world really need 60 volts? That’s massive and unnecessary, right? Was that single rumour I’d heard about 60 volts even true? 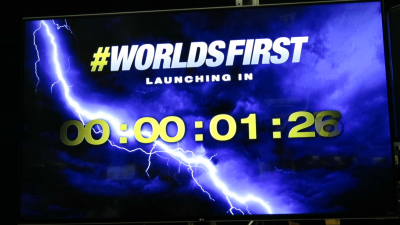 As we sat in the airplane hanger and the countdown screen hit zero, the lights went dark. The screen lit up again, and we were treated to the kind of loud, fast-paced, electric guitar-type videos that tool companies love to use to promote new products. And yes, the main message was about a new 60 volt platform. Okay.

But as I discovered during the next few hours, the 60 volt platform is about something more than a seemingly-unnecessary cordless tool voltage hike. It’s really about eliminating power cords from jobsites everywhere. And I have to admit, DEWALT has taken a daring run at this goal. The more I learned about what 60 volts really means, the more I felt impressed. DEWALT’s target market is building professionals, but the story has something for everyone with a passing fancy towards tools.

The whole Baltimore event took a day and a half because there was a lot to see. Our time there as invited guests was highly organized, without almost no down time. I can’t cover everything in this story, but here are a few of the biggest take-aways: 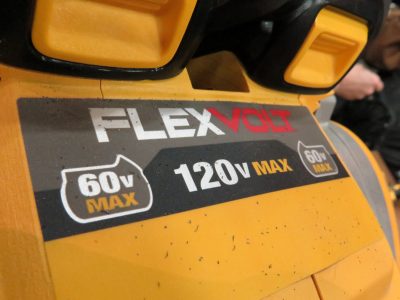 FLEXVOLT: This is the official name of the 60 volt battery system, but it’s not just an upward bump in voltage. The system is smart enough to deliver 20 volts (with increased run time) to older DEWALT tools made to take this kind of power, then 60 volts to previously-corded types of tools that DEWALT has now made cordless. This automatic voltage flexibility is where the term “FLEXVOLT” comes from. One tool – a 12″ sliding compound miter saw – is even made to take two 60 volt batteries at the same time, delivering a total of 120 volts of battery power. Nothing like this has ever happened before.

Cordless 10″ Tablesaw: Part of the FLEXVOLT line includes the first 10″ portable cordless tablesaw I’ve seen, and it proved as powerful as any corded models I’ve used over the years. This cordless model looks a lot like DEWALT’s current plug-in portable tablesaw, except the new model also folds up like a carrying case. 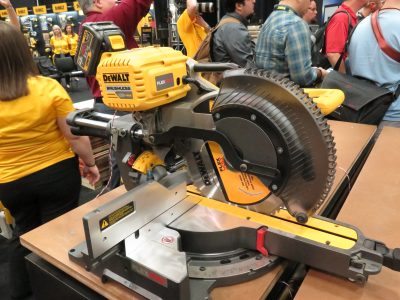 Cordless 12″ Sliding Compound Mitre Saw: This is the tool that takes two 60 volt batteries at the same time. There it is to the left, before it got covered in sawdust. This tools is at least as powerful as any corded 12″ saw I’ve used.

Cordless AC Power Supply: The FLEXVOLT system includes a four-battery charger that also doubles as a source of AC power for plug-in items. Need AC power for tools or camping? This system can provide it, though I have concerns about run time. I’ll need to check it out to see if delivers enough to be useful.

60 Volt Cordless Circular Saw: Looks and feels like any good corded 7 1/4″ saw, but it really does pack a solid punch. DEWALT had the venue set up so we could use all the tools, including this saw. I cut through three layers of 3/4″ OSB easily in a single pass. You can watch a cut I took with the saw right here:

Lots more happened in Baltimore, and I’ll fill you in on details over the next few weeks. But there’s one thing I’ll leave you with . . .

DEWALT isn’t the first company to work towards eliminating all power cords on jobsites. Milwaukee tried it back in 2005 when they launched the first lithium ion batteries in power tools, but the marketplace didn’t accept it. Will DEWALT’s attempt succeed? My guess is yes, but only time will tell. Today’s batteries are better than ever, and DEWALT has wrapped their 60-volt platform in a larger system that lets them “own building sites” with fastener systems, storage systems and accessory products. Interesting times ahead.