In theory, I suppose it’s possible to be a homeowner without tools, but why would you want to? So many of today’s home maintenance and fix-up jobs are a snap to complete with just a few basics. That’s why you’d be foolish not to consider at least a couple of key implements to stash in your kitchen drawer. And one particular design of adjustable pliers is my favourite case in point. 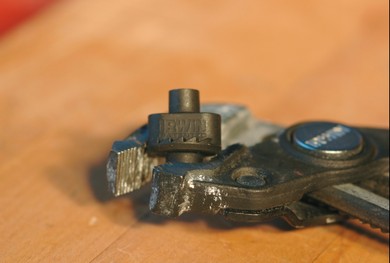 Generically called ‘channel-locks’ after the company that made them popular beginning back in the 1940s, these pliers have become a mainstay of do-it-yourself prowess for one simple reason. Adjustable pliers grip a wider range of objects than any other style of pliers because the jaws move through a large range of possible opening sizes. This design allows one pair of 12-inch-long pliers to grab everything from paper-thin objects, right up to items measuring more than 2 1/2 inches across. If you want to get the most value out of just one pair of pliers, this is definitely your tool.

The key to this wide-ranging versatility is a mechanical system that allows the pivot point of the pliers to be moved and locked through a range of distances from the top jaw. Move the pivot point further away, and the jaws open wide. Bring the pivot close to the top jaw and you can grip thin items. The only problem with some traditional adjustable plier designs has been a tendency for the adjustment mechanism to slip under load. Besides being annoying, this flaw can leave you with pinched fingers and an abruptly bad mood. The good news is that this is quickly becoming a thing of the past, thanks to a relatively new industrial process abbreviated as MIM.

The letters stand for ‘metal injection molding’, a process that allows all the intricacies and economy of plastic injection molding to be applied to very precise, very strong and detailed metal parts. You’ll find the MIM process behind advancements in everything from hand tools to cell phones. 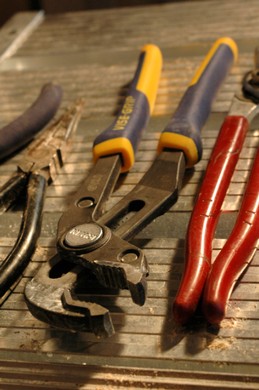 At the moment, my favourite style of adjustable pliers is made by Irwin using an intricate MIM part at the critical pivot point. Saw-tooth serrations around the centre of this pivot allow the jaws to be positively locked in one of fifteen different positions. And if that wasn’t enough, the pivot mechanism is spring-loaded, making it absolutely impossible for the pliers to slip open unexpectedly wider during use. You’ve got to press the silver button to make any kind of adjustment happen. It’s a pretty impressive system.

Most MIM parts begin with a mold made out of metal, just as plastic parts do. But instead of the mold being injected with liquid polymers that cure and harden into plastic, the MIM process uses extremely finely powdered metal mixed with synthetic binders to form a liquid that gets squirted into the mold. And when I say fine, I mean it. In some cases it takes 30 metals particles to make up the diameter of one human hair. Through a process involving heat and solvents, the binder is removed while the tiny metal particles are fused into a single unit with more heat, creating a finished part. Sometimes MIM parts are ready to use out of the mold, and other times they need to be refined a bit more and coated before use.

The bottom line in all this is simple. Tools are getting better and better, and some pretty neat technical advancements are working quietly behind the scenes to make it all happen. That’s just one of the reasons why it’s never been a better time to aim for a great home and make it happen with your own two hands.