By: SteveM
Are sealed, unventilated attics a good idea? There’s a fair amount of debate on the topic, with some engineering folks claiming the advantages of insulating the underside of the roof deck with spray foam. This is a big change from the usual practice of insulating the joist space above the interior ceiling, then ventilating the attic. What’s your take? 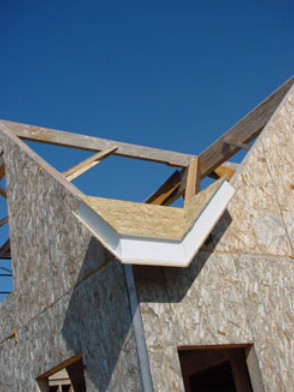 The first thing to understand is that both approaches can work. Ventilated attics are the norm today because there’s never been much of a mainstream alternative until the last decade or so. Traditional ventilated roofs have the insulation in the floor of the attic (in the ceiling of the room directly below), with the space above freely opened to outside air through vents along the eaves or through the roof surface itself. The primary purpose of this approach is to allow moisture to escape from the attic space, especially during winter. So how come we ventilate attics and not wall cavities? That’s because it’s so much easier to prevent condensation in walls than it is in attics. Most ceilings underneath attics are perforated with holes that allow warm, moist indoor air to enter the attic space during winter. Light fixture boxes, attic access hatches and exhaust fan openings are common places where moisture-laden air gets into attics. When the attic space gets cold in winter, the adventurous indoor air that snuck into the attic loses the ability to hold moisture as it cools, forming water droplets and frost. Attic ventilation is primarily to allow this moisture to escape harmlessly.

Unventilated attics typically use some kind of foam insulation as part of the sloped roof structure, rather than fiber-based insulation in the bottom of the attic. The significant thing here is that foam is not only an outstanding insulator, but typically very effective at preventing air infiltration. The bottom line is that warm, moist indoor air still makes its way into the attic space, but since the attic space is more or less as warm as the rest of the house during winter, there is never any issue of condensation.

When unventilated roof structures are built properly, they do eliminate the formation of rooftop ice dams. They can also offer superior energy performance compared with traditional attics. The best unventilated roofs I know of are made with insulated panels that take the place of rafters and trusses. The entire area under these panels is available for use as living space. It’s a great strategy for new home design.

One hidden danger, however, has to do with the roofing material you put on top of an unventilated attic. Outer roof surfaces get extremely hot during summer without ventilation, and ordinary organic asphalt shingles typically curl and fail after only six or seven years under these conditions. Fiberglass shingles, however, are able to withstand high temperatures easily, and last many years over on any unventilated roof structure. Fiberglass shingles look the same as organic asphalt shingles, they’re just much more resistant to heat.