If we were developing Canadian towns, cities and homes from an entirely clean slate today, would we do things the way we’ve always done them? Probably not, and the experiences of a group of modern, northern people thriving in a challenging landscape similar to our own is why I believe this is true. In 2011, I sat in on a conference organized by delegations from the five Nordic countries – Norway, Denmark, Finland, Sweden and Iceland – and I’m still thinking about what I learned there. This entourage of Nordic building professionals and diplomats came to Canada to share their experiences living sustainably and elegantly in a cold landscape, and the experience taught me two things:

So what are the people across the North Atlantic doing? Helsinki, Finland, is a good place to start looking. In that city, more than 90% of all buildings are connected to district heating plants. Insulated, underground pipes connect everything from large buildings and individual homes to efficient central heating and cooling plants that condition indoor air at much lower financial and environmental cost than individual furnaces and air conditioners. District installations like these also offer the option of capturing waste energy and making use of it a second or third time. Heat is even extracted from large computer halls and purified municipal sewage, then added back into the system. Sounds impossible to pull off to this extent in Canadian cities? Maybe the problem is our way of thinking. “Sustainable development is not a burden to the economy,” explained Pekka Sauri, Deputy Mayor of the City of Helsinki. He’s officially in charge of public works and environmental affairs, and has seen first-hand that green building initiatives are “sexy and lead to all kinds of other benefits.” 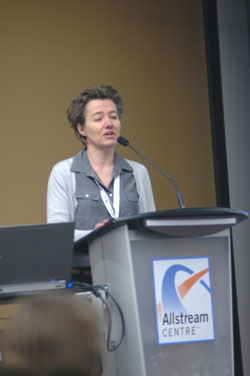 Reykjavik, Iceland is the most northerly capital in the world, more than 2000 km north of Toronto, and even further north than Yellowknife, NWT. Like Helsinki, homes and businesses in this city are connected to district heating systems, a reality that sprang from a program that began way back in 1950. Astonishingly, Reykjavik also uses absolutely no fossil fuels whatsoever for generating heat or electricity. Legislation and the willing population it sprang from also religiously protect groundwater sources to the extent that the entire Reykjavik municipal water supply is pure and safe to drink as it comes directly out of the ground, without any treatment. Part of the mindset that makes this possible is instilled in all young people at an early age through a hands-on urban renewal program that began in 1949. Each year, kids by the thousands are taught to plant trees and care for the appearance of their city. The fact that this is part of who these people are also means that it’s possible for us to move closer to this ourselves.

There’s so much more we can learn from Nordic countries. For instance, Google “Bright Green Island” and Bornholm, Denmark. It’s a community of 40,000 people living almost 40 km off the coast of Denmark who’ve reinvented themselves as a living showcase of sustainability. Or check out the Wikipedia entry on “cycling in Copenhagen” to catch a glimpse of one way to reduce urban traffic congestion.

A video projected at the conference showed a man fishing for salmon within the Reykjavik city limits. Not only are even the largest fish safely edible there, but we see this guy stop, dip a glass tumbler into the urban river, then take a long and satisfying drink of the cool, clear water. If green cities are like this, then how could anyone want to live any other way?