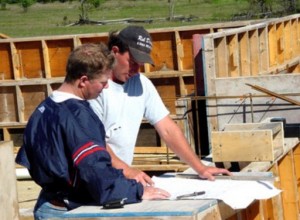 uccessful building should be boring. At least at the beginning, anyway. That’s because all great builds ultimately come down to how clients and contractors interact. Success isn’t primarily about sexy technical issues like floor plans, heating systems and windows. Get the people part right first, and the fun stuff takes care of itself. Get it wrong and you’ll suffer big-time.

Too few clients and contractors spend time setting up their relationship properly ahead of time, and the result is unnecessary hassles and hardships. Both sides often let enthusiasm get the better of them, breaking ground before the deal has been properly hammered out. And while some folks bumble along and stumble into building success this way, many others suffer massive anxiety and huge financial loses because their build blew up. It doesn’t have to be this way.

Learn from the real-life experiences you’ll read about here, follow my simple, three-step, disaster-proofing guidelines, and you can be virtually guaranteed that your building dreams stay sweet.

Disaster-proofing Step #1: Partner Only With the Right People

When a contractor and client get together for a big job, the stakes are as high as when getting married. That’s why you need to take a close look at who you’re hitching up with.

When Peter (not his real name), chose a contractor to build a large addition to his Toronto home, he called a few people in the business, talked to them, then settled on a contractor after driving around in the guy’s crew cab for an hour, looking at projects the guy claimed were his own, all without talking to any owners. Work began shortly after Peter handed the contractor a $30,000 deposit. Things turned sour almost immediately. The guy turned out to be technically incompetent, a bald-faced liar, and prone to yelling profanities at Peter on the front lawn of his house. Then things got worse.

Peter came home unexpectedly one day to find one of the contractor’s workers sucking back a beer from his own fridge, while another “worker” snored comfortably in the basement. In the end, Peter discovered that the contractor’s city license had been revoked because of a mile-long string of poor jobs handled dishonestly. Peter fired the contractor and held on to the guy’s tools as collateral to get part of his deposit back. The police showed up one night, and ordered the tools returned. Only the courts offer any hope of getting some deposit money back now. If there’s any left after the lawyers take their share, that is.

Save-Your-Butt Bottom Line: Ask for at least five real references. Follow them up like your life depended on it. Which contractors were on budget? Which were on time? Ask permission to come and inspect the quality of workmanship. Don’t commit to buying thousands and thousands of dollars worth of work with no more care than you’d expend buying a new shirt.

Disaster-proofing Step #2: Decide Who Pays for What

A friend of mine shook hands with a contractor to build a retirement home. The contractor offered to pay all material suppliers from his end, to make everything easier. All went well until the contractor’s first invoice came in. It included a higher-than-expected figure for materials, a figure that also happened to be a round number. When questioned about the actual material costs and asked to produce original invoices from the lumberyard, the contractor took offense. He refused to produce any original invoices in order to “protect his suppliers”. He was asked again, he refused again. Was the contractor being honest and offended, or did he have something to cover up? Who knows? In the end, the mild-mannered client simply paid the detail-free invoices. To this day he still wonders exactly what happened.

Save-Your-Butt Bottom Line: Every building job needs to have specific financial details spelled out ahead of time in black and white, on paper. Is the job to be based on a binding contract, with total price specified beforehand? Time and materials? Who pays for what? What documentation is expected to keep everyone honest?

Not all building disasters are caused by lousy contractors. Clients can be at fault, too. Some folks are honest enough, they just need an education on how the building process works. That’s your job. Other potential clients are just plain bad news. That’s why both contractors and clients need a structure to keep things honest and fair. Take the true-life case of Roger and Wilma, for instance.

This couple wanted a small new home built, with hardwood floors, full basement, 200-amp electrical service and sliding patio doors. The contractor started work immediately, but he probably wished he had walked away. Little did the guy know, but two other contractors had taken a look at the job, and did just that when they found out who they were dealing with.

Roger was one of those nightmare clients – a man who expects the world, expects it today and expects a 40% discount. Without a payment schedule and change-order procedures in place in writing, Roger had the upper hand. Big-time. He withheld thousands of dollars of payment for months, until the contractor was forced to bend over backwards meeting the expectations of a guy who thought gas was expensive at 47 cents a liter. To this day, Roger and Wilma still bad-talk that contractor every chance they get. They claim to feel cheated to have paid what’s actually the outrageously low $75 per square foot for their new place.

Bottom Line: Set out easily defined financial milestones, specific expectations and liability boundaries at the start. And if that means that you lose a few clients, so be it. Nothing good happens by accident in the building world, especially when money is involved.

Whether you’re a contractor or client, slow down a little. Put your enthusiasm on hold at the beginning of the job. Take the time to explore and discuss all those potentially volatile issues that often go unspoken until they’ve got a bunch of zeros attached to them. A polite meeting or two early on does wonders to keep everyone happy.