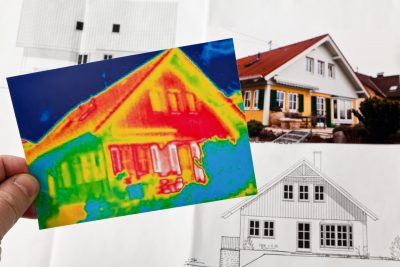 If you’re shopping for a resale home, you can know almost all the financial responsibilities you’ll face for a given house before you buy. Almost all, but not quite. As it stands now, you can know your mortgage payments and property taxes down to the penny, and this translates into the size of mortgage  you can handle. Do you have an annual income of, say, 70k? Websites like this one  help determine the size of mortgage you can reasonably carry given your income. But even with this information, the wild card is still energy costs. For that you’ll need to wait for your name to be on the deed and utility bills to arrive in the mail. It’s a problem because as costs rise, it’s entirely likely that your monthly energy bill could even be higher than your mortgage payments. That’s a pretty big unknown, but it doesn’t have to stay this way.

Right now legislation requires that manufacturers publish independently verified information about the energy consumption of, say, a new fridge, car, dehumidifier and kitchen range, among other things. But energy consumption is a black box as far as prospective home buyers are concerned, at least until politicians follow through and do the right thing. In fact, Canadians are poised to know much more about home energy consumption than ever before, through an efficiency tool we’ve built ourselves. 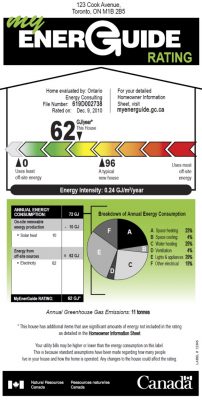 Canada is in the final testing stages of something called the Energuide Rating System for Houses (ERS). It’s a brand new way to measure how much energy a home really uses, how much it produces from sustainable sources such as solar or wind, and how overall consumption of the house compares with other homes in the area. ERS is a great advance for both home buyers and home sellers, but it’s got a big hurdle to cross.

ERS lets people in the home market see exactly how the energy consumption of various properties compare with each other. For example, an efficient home might use about 60 gigajoules of total energy annually. A leaky, cold money pit could easily use three times this amount of juice and more. Technology exists today that allow homes to have net-zero energy consumption. This means that all the energy consumed is matched by energy generated on site by renewable resources. The potential here is huge, but we need some way to measure performance.

ERS figures are much better than asking someone with a vested interest to show you old utility bills because Energuide numbers are generated by independent third parties. No one has an incentive to guild any lilies, or “forget” to include all the electric, gas or oil bills in the tally.

Home sellers benefit from ERS analysis, too. For once they can let their efforts at energy efficient renovations show through in a way that the market place can reward. Everything you do to keep the heat in and drafts out shows up in a lower ERS score that’s directly comparable to houses near by.

As good as ERS is technically, an energy rating system is only as good as the extent to which it’s used. This is where governments are beginning to step in.

Ontario is the first province to announce plans for making home energy labelling mandatory for resale houses sold in the province.  According to the schedule, this is supposed to happen in 2019. I say “supposed to” because change as big as this might take some public support to actually make real. 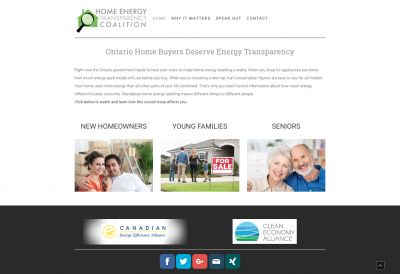 A coalition of interested parties from across the country are part of what’s called the Home Energy Transparency Coalition (HomeEnergyTransparency.org), and it’s a worthy model for everyone across Canada. Grassroots support and organizations are working together to make this happen.

Energy dependency is the sleeping tiger in Canadian society. In a country as cold and as big as ours, our economy and even our very lives depends on a steady supply of energy. And if that’s not incentive enough to learn to use energy wisely, I really don’t know what is.