This past Saturday I had the chance to share dinner with a Swiss-trained carpenter living with his wife and young daughter on the same island I do. Roland is his name, he’s in his 30s, and he’s a fine example of the kind of young, outstanding tradesperson Canada doesn’t produce nearly often enough and has led to the current tradesperson shortage we keep hearing so much about. Our culture and educational systems are the reason why, and to see what I mean, consider how career training unfolds for most young people in Europe. 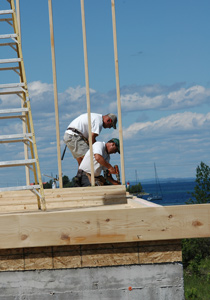 Except for the 10% to 15% of European young people who go on to university, full-time classroom education stops at 16. After that, most students move on to a 21st century apprenticeship system that makes complete sense. Whether you’ve decided to be a butcher or a banker, the majority of your time is spent learning skills in actual workplaces, with experienced workers guiding you. Not absolutely sure what you want to work at? While many young Canadians spend $80,000 and four years of their lives coming to the conclusion that they really don’t like psychology or political science of philosophy after all, their European counterparts have been earning money while  learning a career that they’ve sampled ahead of time ever since they were 16 years old. Canadian students typically emerge from university with tens of thousands of dollars of debt, while the astonishingly qualified young people coming out of the European apprenticeship programs have a full time paycheck and enough money to easily buy a car and get themselves set up to live independently.

Roland seems smart enough to be a physicist, doctor or lawyer and he has recently completed building a 16-sided, timber frame home using beams as large as 8” x 20” and 40 feet long. A tile setter sharing dinner with us installed ceramics in that house and has never seen such precision in his whole working career.  Why are so few Canadian-trained young people capable of such work?   And more to the point, is there any way Canada can break free of the vested interests and social inertia that keeps things the way they are?