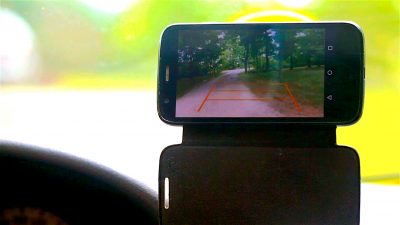 People love backup cameras on vehicles. It’s safer and easier to reverse while watching a screen display of what’s behind your car or truck, but less than a quarter of all vehicles have backup cameras right now. Making it easy to instantly add and remove a backup camera from any vehicle is what Canadian inventor Renny Whipp has created, and his story is interesting because he couldn’t have succeeded until now. 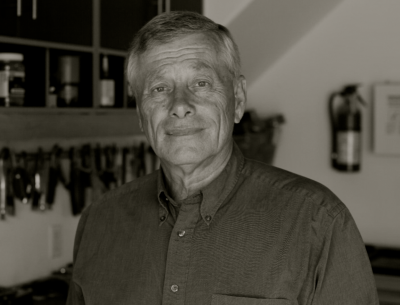 No matter where you look, the internet is changing the world. And while not all these changes are good, empowering the creativity of individuals and small teams is one of the greatest benefits the internet offers.  Renny and his vision is a perfect example. A life long Canadian tinkerer and inventor, Renny has harnessed the power of the internet to build a virtual team that created what he calls the Hindsight backup camera.

Renny has built a working prototype, I’ve seen it in action, and it’s an amazing achievement. The Hindsight would also never have happened without two kinds of essential connections that the internet provides.

When you think of product development, most of us think of nuts, bolts, circuitry and software. But none of these things can come together without the right kind of people behind them. After a failed attempt to have the Hindsight camera developed by a major Canadian university, Renny assembled his own virtual team of engineers online.  Working geographically separate but digitally connected,  they collaborated using design software and 3D printing tools to develop a refined and working product that only a major corporation could have created 10 or 20 years ago.  Like I said, the internet makes new things possible. 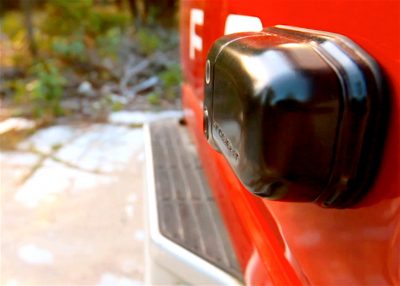 The Hindsight camera delivers a wireless video signal to a smartphone or tablet on the dash of your vehicle. The quick-release base of the camera fastens to any car, truck, RV or transport truck using controllable magnets and a no-mar adhesive. No bolt holes or wiring required. The system has a working range of more than 80 feet, and a warning system in case you back up too close to vehicles, buildings or people. Holding this unit in your hand and using it you’d figure it was made by some huge corporation somewhere, not three little guys working together without pay. But as impressive as the Hindsight is, cool technology is only part of what turns an idea like this into a commercial product. Technology probably isn’t even the largest part. The other essential ingredient is money to fund the jump from prototype to product on store shelves. And finding this kind of money from non-conventional sources is where the connecting power of the internet helps again.

Crowdfunding is what they call it when many individuals invest money  (often just small amounts of money) into a project they believe in, working together to make it real. The internet makes crowdfunding possible by telling the story of young, new products like the Hindsight, showing people around the world ideas they can get behind personally by contributing funds. Why would anyone contribute to a crowdfunding campaign? A couple of reasons. 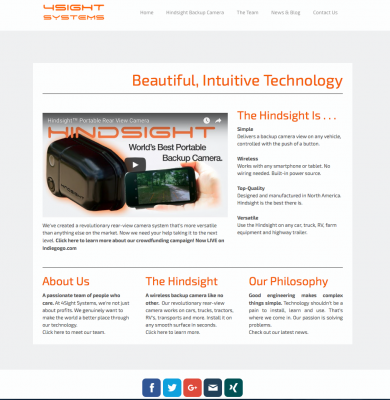 One is to share in the thrill of innovation, experiencing the excitement that’s behind the best new products. Another reason is more practical. Crowd funders get rewards based on how much they contribute and how the campaign is set up. This might be a small perk for a small contribution, or something big like the option to buy the new product at a discounted rate when production begins.  The Hindsight is at the crowdfunding stage right now, and you can see it in action at www.4sightsystems.org.

Nothing big ever happens with just one person. The Hindsight is proof that its easier than ever to bring good people together to make good things happen, even in a small home workshop.