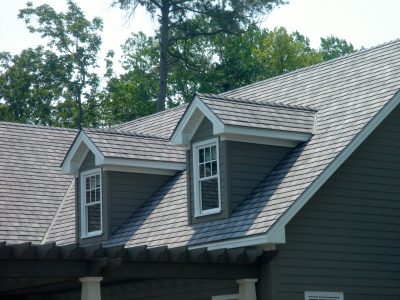 A few years ago I was walking down a busy street in downtown Toronto on a sunny summer afternoon and I happened to look up at the roof of a cathedral. More than a hundred feet above the sidewalk was a man wearing a harness and rope, climbing on the steep roof to repair the slates. Slate is a natural, layered stone and it’s been used to make some of the longest lasting, most environmentally sound shingling materials since ancient times. Besides the distinct feeling that everyone on the sidewalk that day should have looked up and given this guy a standing ovation for the guts and skill it took to be up there making things right, watching him also made me smile for another reason. Just as few of us on the ground could scale the heights that brave worker had reached, slate roofs are also out of reach of most of us on a financial level. They simply cost too much, no matter how long they last or how little environmental impact is involved in making slates. All this is why the promise of lower cost, long life and the surprisingly authentic slate substitute caught my eye. It also happens to be 100% Canadian.

Normally, I’m not a fan of look-alike building materials, but when the look-alike is indistinguishable from the original, and when that look-alike offers a 50% cost savings, I can’t resist at least taking a look. That’s the case with something called Enviroslate.

Made by a Chatham, Ontario company, their slate roof substitute is manufactured with the same material as their original Enviroshake roofing. And that matters to me because of the long-term experience I’ve had with Enviroshake. Back in 2002, a friend installed an Enviroshake roof, and it’s performed flawlessly ever since. Except for a slight lightening of the surface over time, the material has certainly proven itself absolutely reliable as far as keeping water out. It also looks exactly like real cedar shakes when viewed from the ground. Even sticklers can’t tell.

Both the field-proven Enviroshake and the new Enviroslate are made from the same composite material. In this case “composite” means a blend of recycled plastic and wood fibers – similar to my favourite type of non-wood decking materials. The only difference between Enviroslate and Enviroshake is the shape the material is molded into. And shape is the really surprising thing about this product. 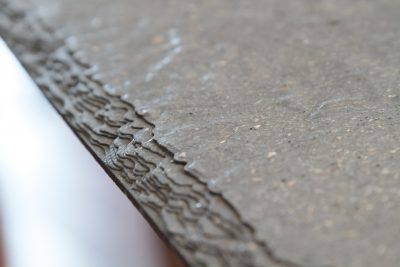 I’ve worked a little with real slate in the past, and looking at a piece of Enviroslate on my desk as I write this, it’s indistinguishable from the real stone at a distance of about a meter. I doubt even an experienced slate installer could tell the difference looking up from ground level. Slate is a flaky stone as it’s quarried from the ground, and the layered edges they’ve created on the look-alike are a big reason the product looks so convincing. I’m not sure how these edges will resist weathering over time, and that’s the only concern I have about the long-term look of the product.

On a technical level, Enviroslate carries a UL 2218 Class 4 impact rating, which denotes the highest resistance to damage from hail you can get in any roofing product. Enviroslate is also lighter than authentic slate, which means you can install it on a regular roof frame with no need for reinforcements. The product is also a consistent thickness, so any cut edges show no ribbing or hollow spaces.

While true slate roofs may be out of reach for all but the most wealthy people, there’s now at least one option that brings the choice of a convincing slate alternative a lot closer to the ground than it used to be. And even a stickler for authenticity like me has to be impressed.