UPDATED 15Feb2020: If you’re installing a toilet, there’s something you need to know. Even brand new toilets can flush lazily and use more water than they‘re rated for. That’s why you need to be an informed toilet shopper, and a Canadian named Bill Gauley has made this possible no matter where you live.

Bill is an engineer, and more than twenty years ago he ran into the same problem many people did back then. His new low-flow toilet didn’t flush cleanly every time. Even worse, after measuring the water use of this toilet, he found it actually guzzled 10 litres of water per flush instead of the 6 litres it was supposed to. Fast forward 20+ years and Bill has turned his interest in toilet performance into a career. His company, Veritec Consulting, publishes verified toilet performance ratings for free online. This has forced manufacturers around the world to design toilets that work better and use less water.  Veritec has made a big difference by shining a light on toilet reality, but you still need to be careful as you buy. Not all toilets have a good rating, even these days.

Selecting a toilet begins with a visit to Bill’s website: map-testing.com. Click on the toilet testing link on the left and you’ll find a search feature that allows you to locate specific toilet models. I used Bill’s site a while back  to select a toilet for a house I’m building and the process is simple enough when you understand what testing reveals.

Bill’s team uses a testing system that’s as close to reality as most people care to imagine. Probably too close. Measured cylinders of extruded soy bean paste (whats what you see to the left) are placed in toilets being tested. The toilets are flushed, then examined to see if any extrusion remains. The bare minimum level of acceptable performance is between 250 and 350 grams cleanly flushed. Toilet models that can handle 350 to 600 grams of “extrusion” are considered strong flushers. The ability to deal with 600 to 1000 grams makes a toilet eligible for induction into the “great flushers” hall of fame.

I used the Veritec website most recently to assess a Pfister VTP-E21W toilet. A client liked the size, shape, price and availability, but I wouldn’t install it without seeing performance numbers. A pretty, economically-priced toilet is no pretty bargain at all if it doesn’t flush reliably. 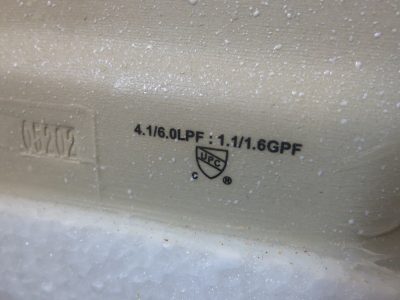 The VTP-E21W has the same dual-flushing capability that European toilets have had for years. One button on top of the tank triggers a gentle flush with less water; the other button flushes with the full force of water when needed. As it turns out, the particular Pfister model I looked at rated in the top tier as a great flusher (1000 grams no problem), so the choice was a no-brainer. It also carries the WaterSense rating approval, which makes it easy to see at a glance that this model uses water efficiently as well. When Bill Gauley started his testing program, water usage figures like the one you see stamped here on a toilet didn’t necessarily mean anything. These days manufacturers everywhere have been forced to a higher level of honesty. 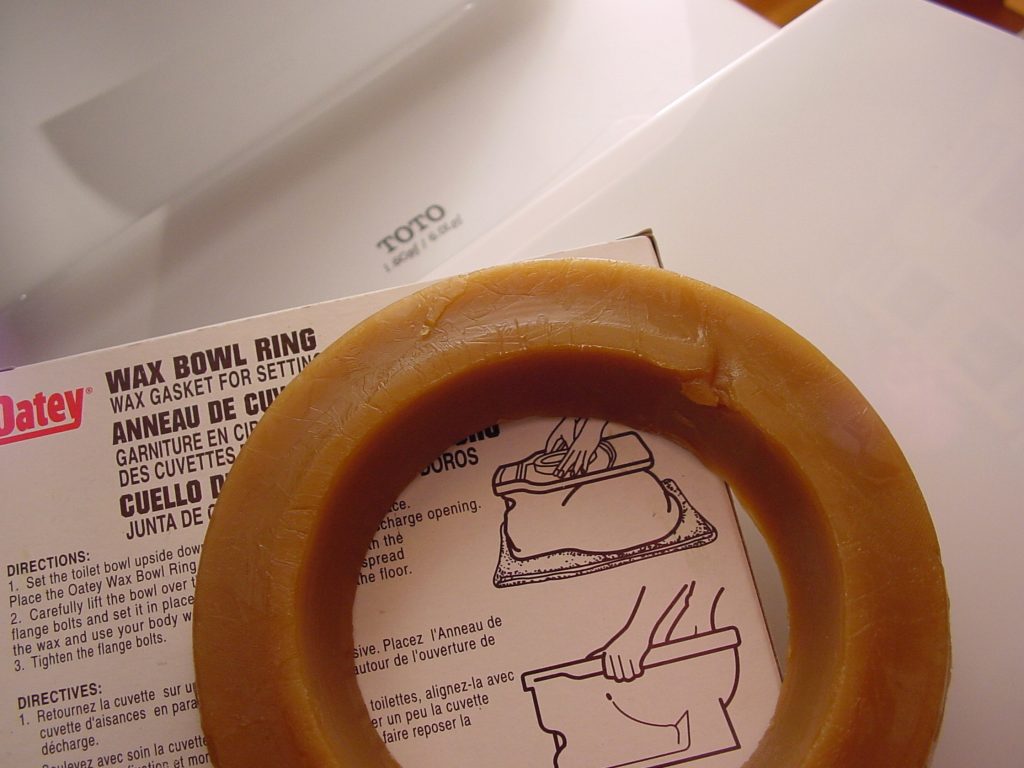 It’s one thing to choose a good low-flow toilet and bring it home, but installing it is another matter.  Most handy homeowners can replace their own toilet provided they keep two things in mind. First, you need some kind of replacement sealing ring to waterproof the connection between the toilet and the drain pipe underneath (like the one above). And second, you need to connect the toilet tank to your water supply. 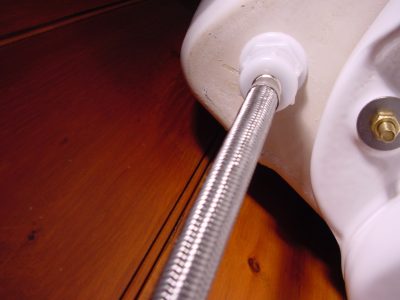 Older toilets are typically fed with a non-flexible pipe (usually copper) attached directly to a fitting on the tank. Newer toilet tanks are designed to accept a flexible water line that simply threads onto a fitting on the supply pipe coming out of the wall and the toilet tank at the other end. That’s what you can see here. If your existing toilet isn’t connected with a flex hose right now, then you’ll definitely want to upgrade while installing your new clean flushing, low-flow toilet. It’s so much easier than soldering, and not just for future toilet replacement. Even with the toilet you’re putting in now, getting rid of the soldered connection and replacing it with a flex hose that hand tightens is definitely the way to go.