Over the last five years I’ve been trying to understand a kind of beauty I see from time to time. It has to do with old brick buildings and I think I have it figured out. The most impressive brick buildings I see are almost always at least 75 years old. Where modern brickwork tends to be quite plain, older brickwork is more likely to be thrilling and detailed. Exactly what features create these qualities? 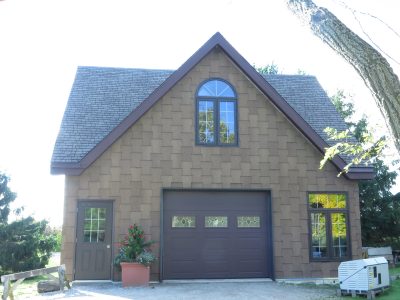 My interest in brick isn’t just academic. After I built the stone house we live in, I built a two-story workshop nearby. My wood shop is in the lower level, and the upper level is where we do “computer work” – writing, video editing, and other digital work. Not far from the round-topped window you see on the second floor here is where I’m typing this blog.

The outside of the workshop is currently covered in what I call my “long term, temporary siding”. I applied interlocking asphalt roof shingles to the walls to buy me as much time as necessary to complete the masonry work on the outside. I’ve decided to go with brick for the workshop, but not just any brick. I want to capture the look and feel of those great old buildings I see, but at first I didn’t know how. The goal is to conjure that classic old-time look and feel of brick buildings that used to be common, yet almost never get built today. I think I’ve figured out how to do it.

The traditional styling I settled on might not be for everyone (no style is), but it offers lessons on how new brickwork can move beyond the ordinary. Perhaps you’d like to learn a little about my design process and how it plays out on a scale plan I created. 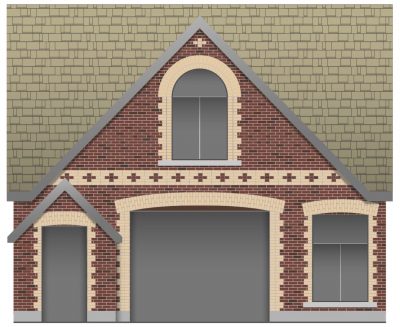 The scale plan you see to the right is the design I’ve come up with. I created it with help from a genius friend of mine named Len Churchill. Even though Len’s office is 7 hours drive from my place, we’ve worked on projects together every month since 1990.

The shape of this building is an exact replica of the real thing, and each brick is drawn to scale. When it comes time to build, I’ll make story poles to show me exactly where each course of bricks go.

The first thing to notice about this design is the way lighter bricks are used to define the edges of windows and doors. This is a feature I see in older buildings that thrill me. The alternating pattern of long and short bricks on vertical edges work together with the thick arches above openings. There are simpler ways to span openings than arches like these, but arches offer two advantages. Besides adding visual details, they span openings with no metal supports that can rust and fail. Arches are both beautiful and practical.

My scale plan also shows how the red brick is actually a combination of two shades arranged in a random pattern. This detail is a throw-back to the days when bricks were made from natural clay dug from the ground and fired without much refinement. Natural variations in colour of the clay led to bricks with varied shades. While colour variations in brick began as an organic reality, it also happens to look great in many situations. This is one reason old, reclaimed brick remains popular and it’s also why brick manufacturers intentionally create different shades of new brick in a single type. If you’re looking for a traditional appearance, choose a brick style with varied shades. Single-colour brick creates a more modern flavour.

Banding with different colours of brick is another design element that used to be common but now largely forgotten.  Of all the features of fancy brickwork, banding is the most powerful and noticeable. That’s why you should only use it as part of a definite plan. The plan here was drawn around actual measurements for doors and windows, and actual sizes of brick and mortar joints.

Some people might argue that the more intricate look of traditional brickwork is just the style preference of yesteryear, but that notion misses the mark. I can’t believe that anyone really prefers an unending expanse of plain brick when details and variation can be so pleasing. The reality of today’s tendency for plain work probably comes down to economics, at least in part.

Once upon a time, the cost of labour to build with brick was 1/3 of total job cost. These days labour costs 2/3 of total cost. This shift pushes projects towards simpler, less sophisticated visual results, but this doesn’t seem legitimate to me. Since the extra cost of more skillful brickwork is spread out over many decades, it amounts to nothing significant at all over the long haul. As usual with so many things in life, looking beyond ourselves and our own timelines is part of making beautiful things happen.