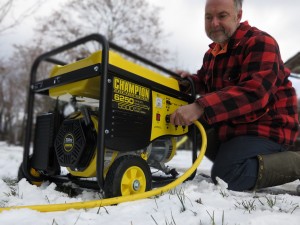 “You don’t know what you’ve got ‘til it’s gone”, may just be a line from an old Joni Mitchell song, but it also describes our relationship with electricity. Heat, light, the ability to cook, compute, communicate and even enjoy flowing water is dependent in some way or another on electricity from the grid. If you experienced the recent storm-related power failures in eastern North America, you know what this feels like. The importance of reliable power is being driven home where I live with more frequent power failures. I don’t know for sure if Canadians everywhere are having their faith in the grid shaken in this same way that’s happened to me, but something is going on. There are many more generator owners since I bought my first one in 1988, in part because of a huge drop in prices and in part because the electrical grid isn’t what it used to be.

Considering a generator for your home? Start by thinking about three issues: size, portability and power quality.

Watts are the yardstick of power consumption in the electrical world, and watts are how generator sizes are rated. Add up the peak wattage of all the things you want to use during a power failure, add a 20% allowance for extra capacity, and that’s the size of generator you need. Sounds simple enough, but there are complications.

First of all, not all electrical items have wattage numbers stamped on them. Voltage and amperage numbers, however, must be shown by law on all electrical items, and that’s a good thing. Simply multiply voltage and amperage specs to get a wattage consumption figure. Without getting too complicated, most people find a 3500 watt portable generator sufficient for bare-bones basic household needs – fridge, freezer, lights, household water pump, kettle (though not all at the same time). A portable 7000 to 9000 watt model makes life during a power outage noticeably better.

Want complete power back up without having to haul a generator out of the garage? That’s where stationary home standby generators come in. You can power most things in a modern home with a stationary model putting out at least 12,500 watts. Units like these sit in an outdoor enclosure in your backyard and fire themselves up automatically when the power goes out. Prices on stationary models have dropped a lot over the last 10 years. The cost of a 15,000 watt stationary model is now less than half what I spent on my 3500 watt portable model 20-something years ago.

And while there’s no shortage of cheap generators on the market these days, many are too cheap to be reliable. One of the best combinations of low price and high quality I’ve seen so far is delivered by the Canadian arm of Champion generators (championpowerequipment.com; 877-338-0999). They’ve got a larger and more responsive service network than any other economically priced generator brand I’ve discovered, and you can win one of two of their generators in my current giveaway contest. Enter for free here.

Power quality isn’t an obvious issue when selecting a generator, but it should be. In fact, it’s crucial if your generator will be powering electronics, and that means just about all of us.

Although standard generators put out alternating current with the right voltage for the things in our lives, that doesn’t necessarily mean this power is “clean” enough for sensitive electronics.  Computers, stereos, DVD players, TVs, appliances with electronic controls and even some cordless tool battery chargers need power that’s free from damaging surges and wonky wave patterns.

Generators that produce exceptionally clean power are called “inverters”, and though they do cost more than standard models, they offer another advantage. Inverters usually have a variable load feature that controls engine speed depending on the electrical load demanded. If you’re calling for only 10% of the inverter’s capacity, engine speed will run just slightly more than an idle; 50% demanded current draw and the motor will run half speed. Full demand, full engine speed. This translates into quieter operation and greatly reduced fuel consumption.

Generators are better than ever and less expensive than ever, so it’s easy to like them. Choose one well and you might even find yourself looking forward to the next power failure.