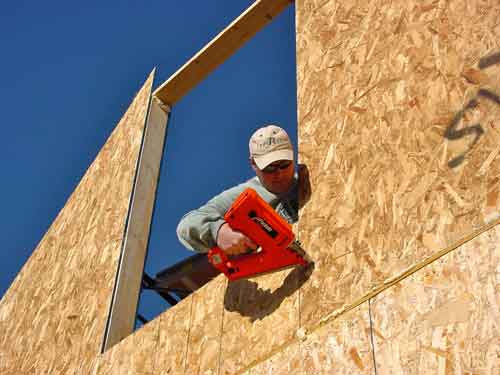 Most of the tool technology that makes it down to the do-it-yourself level first appeared as high-priced industrial tools before entering the mainstream world. Cordless nailers are a case in point. They drive nails using an internal power source only – eliminating the need for a separate air compressor and air hose – and they’re finally beginning to gain the attention they deserve at a DIY level. It’s about time, too.

History of the Nailer Power Tool

Twenty-five years ago, a power tool company called Paslode invented what seemed impossible then, and still strikes me as astonishing today: a nail gun capable of driving 3 1/4-inch long framing nails into the hardest woods, powered by internal combustion. Unlike all other nail guns at the time (and most today), the Paslode tool uses a disposable gas cartridge stored inside the tool. While freedom from a hose offers obvious advantages for productivity-minded professional builders, cordless nailers also make sense for economy-minded homeowners, too. If you’d rather not buy and store an air compressor just because you want to build quickly and well, I can help you.

In the world of cordless nailers, there are two main types: gas-powered (like Paslode invented in 1986), and battery powered (invented by Senco in the late 1990s). Both categories are made today by several manufacturers, but one thing won’t change soon. Battery powered cordless nailers are built to drive finishing nails only, while various models of gas nailers are available to shoot either framing nails or finishing nails (not both), depending on the model. Power is the

reason for the difference.

The potential for power from combustion technology is greater than that from batteries, and that’s why all cordless framing nailers run on gas. Framing nails are the large fasteners that hold your house together, and they’re big enough that battery power alone can’t drive them. Gas nailers are now also made by Hitachi and Bostitch, but since Paslode was first to market, their gas cylinder design is generic and interchangeable. In all models the gas cylinder fits under a trap door just behind the tool body, with each fresh cylinder storing enough energy to shoot about 1000 nails, at a cost of less than $10 per cylinder. Just be careful about how fresh your gas canisters are. The gas won’t ignite reliably beyond its rated shelf life. If your nailer starts to shoot sporadically, bad gas is probably why.

All gas nailers have a small, interchangeable, rechargeable battery, too, but it doesn’t provide the energy required to drive nails directly. Instead, the battery works in a support role in two ways.

There’s a slight odour from all gas nailers after each shot, but it’s hardly noticeable.

Are you interested in driving finishing nails for trim installation and furniture building? You’ll find both gas nailers and battery-powered models available for shooting three kinds of finishing nails: 15-gauge are the thickest, with 16- and 18-gauge going down from there. While 18-gauge nails leave a slightly smaller hole, they’re only available up to 2 inches long and this is a bit short for some applications. You’ll probably find a 16-gauge finishing nailer the most versatile, combining relatively small hole size with nails up to 2 1/2-inch long. 15-gauge nailers provide the most holding power, driving nails up to 2 1/2-inch long that are about the same thickness as hammer-driven finishing nails.