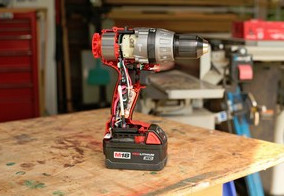 No other category of power tools has improved as much as cordless over the last 10 years, and this fact is changing the way our world is built and maintained. Fueling this good news story are converging technical advancements that promise to extend the cordless tool revolution, though probably not in the direction it’s taken so far.

Back in December 1990, I bought my first cordless power tool, a 9.6 volt Black and Decker “Professional” drill that I still have today. It was a mid-range model at the time, and although I was glad to have it, the drill certainly wasn’t about to replace my corded model. What that new cordless delivered in convenience, it cost in low power and short working life. With a fresh charge, and a stiff tail wind, it could just barely drive #8 x 3 1/2-inch screws all the way into soft wood.

As the decade wore on, it seemed each new mail-order tool catalogue proclaimed higher-voltage cordless tools that promised more. And those promises were met, as I discovered while conducting cordless tool reviews for publication. As top-end voltages climbed to 12, 14.4, then 18 volts, the performance of cordless drills met and surpassed what was delivered by typical corded drills. Then, something interesting happened.

Once the 14.4 volt threshold was crossed in the mid-1990s, the power contained in those leading-edge battery packs had become sufficient to supply energy to tools that hadn’t yet been offered in a cordless format. I remember testing DeWalt’s first cordless circular saw, for instance, on a verandah project that involved cutting framing members in-place while standing on a ladder. Although the saw had to struggle while ripping 2x lumber, it could do the job. Crosscutting was a breeze, though working life between charges was limited. But that was a small price to pay for the freedom from a cord in that situation. Nowadays, cordless versions of reciprocating saws, jigsaws, biscuit joiners and even sliding compound mitre saws are becoming common. And this is probably the direction that cordless advancements will take from here on out. With the voltage ratings of top-end cordless drills now hitting a wrist-twisting 24 volts, how much more power does anyone need in a hand-held drill? And how many users can justify a drill that approaches the $500 mark? As batteries, chargers and cordless motors improve, I suspect they’ll be applied to a wider and wider range of tools, leading towards a point where the distinction between corded and cordless becomes narrower and narrower. Perhaps one day it will disappear all together.

The story of cordless tool performance is really the story of advancements in energy storage and energy conversion technologies. Electrical energy comes out of a wall socket and travels through a charger on its way to a cordless tool battery. Energy is held in storage in this battery, then is converted to mechanical energy by a tool motor that delivers it to your workpiece via a drill bit, recip saw, or spinning circular saw blade. That’s the flowchart view of energy movements, and improvements made in each link of this chain are adding up to today’s awesome cordless performance.

Traditionally, cordless tools have been powered by nickel-cadmium batteries (called ni-cads), though that’s starting to change in a controversial way with the advent of nickel metal-hydride batteries (abbreviated Ni-Mh). But regardless of the chemistry used, within each of those snazzy snap-on battery packs you’ll find a bunch of pretty dull-looking cylindrical cells, each putting out 1.2 volts, soldered together in series. The size of the cells within the pack determines the amount of energy stored in them, as distinct from voltage which measures the amount of force behind the flow of electrons. And the distinction between these two parameters — total amount of energy stored (measured in amp-hours) versus force of delivery (measured in volts) is important enough to you as a tool user that it’s worth a closer look.

Although all cordless tools prominently carry voltage ratings, this number doesn’t have anything to say about the total amount of energy stored in the battery pack, measured in amp-hours (Ah). This figure is directly related to run time and is akin to the size of a vehicle’s fuel tank, to use an automotive analogy. While it’s one thing to know that, say, a 4×4 truck has a 350 hp motor, that fact says nothing about how far you can drive between fill-ups. Motor power and gas tank size are two different things, and that truth applies to both trucks and cordless tools. Currently the largest cordless tool “tanks” are approaching 3 Ah and getting larger. But you’ve got to be careful. Many battery packs are only half this size, and some manufacturers choose to play down amp-hour designations in their advertising. You’ve often got to do your homework to know what you’re actually getting.

The only power tool company that currently makes their own cordless tool batteries is Panasonic. All other makers use cells made by outside suppliers, including Panasonic and Sanyo. Although this fact doesn’t affect tool performance to a large extent, it does point to a development that you’re likely to see more often. As tools become more sophisticated, the need for specialized manufacturing of components increases. The economics of making batteries is such that only specialized companies can compete in the marketplace. We’re likely to see this trend spill over into motor components and chargers, too.

And what about the new nickel metal-hydride batteries that are being lauded everywhere these days? Depending on who you speak to, Ni-Mh batteries are either the next step forward in cordless performance, or an immature technology that holds the promise of better performance someday, but not until further refinement occurs. It’s not often that you hear such widely differing views held by competing tool manufacturers, but this is the case. Proponents claim that Ni-Mh delivers more work than similar ni-cads over the lifespan of a given battery pack. Detractors claim Ni-Mh batteries discharge faster on the shelf, deliver less power per charge, and have a shorter working life than ni-cads. The Ni-Mh camp says their batteries are less of an environmental hazard because they contain no cadmium, while the ni-cad people point out that all rechargeable battery packs should be returned to a certified battery recycling depot when they no longer hold a charge. So, who do you believe? Although there are differences between ni-cads and Ni-Mh batteries, these differences shouldn’t be the bottom line in any purchase you make. Features, availability and tool price add up to more important considerations than battery chemistry.

You can easily drop $100 on a replacement battery pack for a mid-range cordless tool, and the figure is almost twice as much for the largest 24 volt packs. And since cordless batteries don’t last forever, that’s quite an investment for what amounts to a semi-expendable part of the cordless tool equation. In an effort to extend the working life of cordless tool batteries, manufacturers have focused R&D efforts on charger advancement in a big, yet hidden, way. This behind-the-scenes progress is difficult to communicate to the public, so it doesn’t have a high profile. But just the same, modern chargers are a major reason why cordless tool performance is better than ever.

The working life of a cordless tool battery depends, in large part, on how that battery is charged, and especially how the cells within a battery pack rise in temperature while charging. Heat is the enemy of both Ni-Mh and ni-cad batteries because of a common feature they both share. Too much internal heat, and battery lifespan drops to less than half the potential 1200 to 1500 charge/discharged cycles. Within each rechargeable cell is a series of layered circles, called electrodes, divided by components called separators. The cell’s electrical charge is created by chemistry that occurs within the positive and negative electrodes, chemistry that depends on the electrical insulation offered by separators that exist between the electrodes. The problem is, heat generated while charging breaks-down the insulating effect of the separators, causing internal short circuits across neighbouring electrodes as it does. Electricity that’s wasted within a cell by these shorts is electricity that can’t do any work for you. And in fact, to make matters worse, internal shorts also generate more heat during use, which encourages more separator breakdown.

The latest battery chargers are now surprisingly sophisticated, monitoring dozens of parameters during each charge cycle. There are two reasons for this. The first is to minimize damaging heat build-up within cells so battery cycle life will meet its potential. The other reason is to provide a troubleshooting diagnostic service for that time when the inevitable battery problem does arise. Top-notch chargers can now tell you what is wrong with a battery (if anything), instead of leaving you guessing why your fully-charged, sputtering cordless tool has all the torque of a wind-up model airplane.

No one knows where cordless tool performance will top out, because it’s impossible to predict the extent to which technical improvements in one sector conjure more improvements in related ones. But we’ve recently crossed an important milestone. Over the last 24 months it’s become possible for an entire house to be built using only cordless tools. And who would have thought that was ever going to be possible when my old 9.6 volt drill was king.