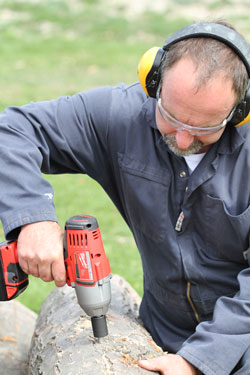 When it comes to cordless tools, battery performance is the biggest part of how well a drill, saw or impact driver works for you.

Cordless power tools succeed or fail on their batteries, and that’s why I tested the loudest and most blatant cordless tool performance claim out there right now.

And after 20 years of tool testing, the results still surprised me.

Milwaukee is one of a handful of international power tool manufacturers, and they claim to have developed a proprietary battery technology that beats everything else on the market in a big way. Figures like 40% longer run time between charges and 20% more power than the best competing batteries are being quoted, and this sounds like typical advertising hype to me because those gains are so huge. That’s why I put these numbers to a very rigorous, real-world test.

Milwaukee’s RedLithium batteries are the source of all the talk, and to test them I used an 18-volt impact wrench to drive 1/2-inch diameter by 6-inch long lag bolts into and out of predrilled holes in the side of a red oak test log as many times as possible on a full charge. I used the identical tool to test two batteries – one was Milwaukee’s regular 18-volt and the other a RedLithium 18-volt. To make the test most accurate, I ran each lag bolt in and out of a 3/8-inch diameter pilot hole only 10 times, before moving onto a new hole. More drives than this and the holes got too large to maintain consistent friction. Fresh holes mean tough driving, and that’s what I wanted. To measure claims for increased power, I also timed how long it took to drive each batch of test bolts from start to dead battery.

One of the unexpected surprises of the test was just how hot the lag bolts became. After 15 or 20 drives into and out of the wood, the entire lag bolt was smoking hot. The oak log I used was still fresh enough to contain lots of sap, which boiled away vigorously around each bolt as it went into and out of the steaming wood. When the bolts got really hot it even caused audible puffs of steam to come out of the hole as the metal pulled away from the wood.

To ensure consistency, I ran the test for each battery twice, after a full charge and recharge, and after the impact wrench itself cooled down. The work out was intense, and the tool did get hot. In the end I discovered that not all commercial claims gild the lily. In fact, Milwaukee has understated RedLithium performance based on my lag bolt test results.

Work completed on one charge was a whopping 73% greater for RedLithium, while driving each screw an average of 18% faster. I made a video of the test so you can see it all for yourself.