Gluing pieces of solid wood together edge-to-edge to make wide panels is a routine part of woodworking, but boards don’t always take kindly to the process. More often than not small warps or cup-shaped sections cause some boards to extend up past their neighbours, making for a much more difficult job sanding the assembly flat later. Various strategies for wrestling boards into alignment during glue up have been a part of woodworking for centuries, but there’s no traditional trick that makes the job super-easy when you’re dealing with multiple boards forming a single wide assembly. Solving the problem of board-to-board misalignment is why the Damstom D300 panel clamp was invented. 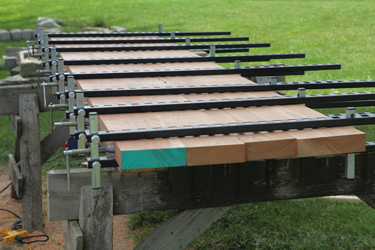 This Canadian-made clamp isn’t the first of its kind to combine both alignment and clamping pressure, but it is one of the better examples I’ve used. Each Damstom panel clamp uses a pair of perforated steel channels spanned by a pair of square steel inserts. Remove the floating insert, slip the D300 over the panel you’re gluing, then reinstall the insert one perforation beyond the width of the panel. Squeeze the free ends of the channels together with your hand as clamping pressure is being applied and the channels push the entire group of boards into better alignment. This is the process and it works in most cases. The D300 doesn’t have the power to force very thick or reluctant boards into perfect alignment, but that’s not often something that comes up in most woodworking projects.

At $75, the D300 isn’t the cheapest option for pulling together boards being edge-glued, but the fast operation, relatively light weight and ability to work with wide ranges of panel widths makes them significantly more useful than regular bar or pipe clamps in my book. They won’t completely replace a set of pipe clamps for general woodworking, but they are a great complement to what most of us use all the time. You can learn more about the D300 and the shorter D200 at damstom.com or 450-824-1592.