Back in 2010 some guy stole between $20,000 to $30,000 worth of stuff by pretending he was me, and this event has something to say about our world. The thief didn’t break into my house physically, but was granted access to my financial identity by a telephone banking operator at the Bank of Montreal who failed to exercise basic diligence. What I know now may save you some of the time and grief it cost me to clean up the kind of home security mess that’s becoming more and more common.

It started when an overly-trusting telephone banking rep at a major Canadian institution allowed a thief to change the billing address on my credit card, even though this guy couldn’t correctly answer any of my personal security questions. Seven days later, this guy called the credit card company again, asking for a replacement card, claiming his current one was damaged. It wasn’t, of course, because he didn’t have a damaged or any other kind of Steve Maxwell credit card at all. The lie he told was just to have a physical card sent to him at his address. That’s when his fun began.

On the morning of Saturday, August 28th, with his shiny, new Steven Maxwell credit card in hand, the thief bought thousands of dollars worth of stuff in my name before using my card to get other new cards that he filled to the limit. He bought lunch for himself, gassed up his car and spent a weekend at an expensive hotel and gambling casino. He must have had a lady with him because he bought a bunch of expensive women’s clothing, too.

Thirty six hours later, an agent from the credit card company called me, wondering why my spending patterns were so different than usual. That’s when the work and worry began. As I quickly discovered, the entire credit industry is link together as one organic unit. When fraudulent activity enters one part of your credit life, it spreads to all other parts like a virus almost instantly. The fictitious address and telephone number provided by the thief immediately made their way to my credit records, even to the point where I had to quote this erroneous information just to gain access to correct my own records later on.

If anything like this ever happens to you, here’s what you need to do. Start by calling the credit rating agencies  where you live. In Canada the two names are Equifax (www.equifax.ca; 866.828.5961) and TransUnion (www.transunion.ca; 800.663.9980). There are organizations like these around the globe. Let them know you’ve been the victim of identity theft, and they’ll take a verbal report. You’ll also need to verify your corrections in writing later on, accompanied by photocopied and notarized proof of your authentic information. Follow up directly with the various card companies and cell phone providers involved in fraudulent claims made in your name.

Next — and this is important — call whatever anti-fraud police organization exists where you live. In Canada that’s the Canadian Anti-Fraud Centre (www.phonebusters.com; 888.654.9426). This division of the Royal Canadian Mounted Police (RCMP) takes a report of your incident to substantiate your claims that fraudulent charges don’t apply to you. Once again, contact whatever local police agency is in your community.

The best news to come out of all this is that I was never in any danger of being financially responsible for the thefts done in my name. And while that’s good for me, it’s sad and puzzling for our world. As I discovered during my mop-up work, credit crimes are on the rise – sad proof that the moral fiber of the developed world is in sharp decline. When I was a boy, the entire credit card industry functioned just fine on nothing but trust and mechanical carbon imprint sliders. You signed the credit card receipt and signatures were honoured and honourable then, at least most of the time. No digital verification, no automatic anti-theft system. Now even our digitally interconnected credit system is regularly breached, and that makes me wonder. Why does the banking industry allow credit fraud to continue when technological options exist to prevent it? And why couldn’t the Bank of Montreal train their telephone banking person to follow the simple security rules and not let a complete crook get into all my accounts when he could not verify himself in any way?

Way back in 2008, in South Africa, for instance, every time you attempt to use your bank card or credit card, an automated call goes through to your cell. Without you sending a verification response from your phone, no one can do anything with your account. I learned this first hand when Mary and I were in South Africa getting Ellie as the baby we adopted. If you don’t key in your secret access code into the phone at a gas station, banking machine or grocery store checkout line, the transaction won’t go through. I guess neither the money lost nor the thousands of hours spent by individual people like me fixing up their tattered credit lives is incentive enough to implement something more secure than the patchwork system of chip-equipped cards we’ve got now. Perhaps if more of us realized how much the modern financial system still relies on the kind of old-fashioned trust that’s dwindling fast, effective protection measures might appear. 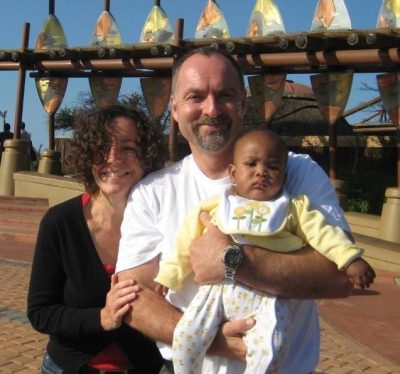 Was this article useful? I hope so. Please consider helping me cover the cost of producing and publishing content like this. The “buy me a coffee” button below makes it fast, easy and safe to contribute. A big thank you to everyone who is helping out regularly.