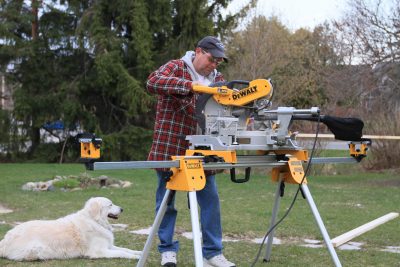 Some of the bravest people I know move into inexpensive older homes, they reverse decades of massive deterioration economically with their own hands, all while earning a living, raising kids and avoiding a massive mortgage. But this work is often more time consuming and difficult than it needs to be for lack of a few basic tools but often overlooked tools.  Al and Denise Kostecki can tell you this for sure. That’s Al working there to the left, next to his dog.

In 2002, the Kostecki’s and their son Jake moved into a two-story fixer-upper that was built in 1912. Like many older homes in small-town Canada, the classic lines concealed decades worth of poor renovations and chronically postponed maintenance and repair. For instance . . .

Years before the Kostecki’s moved in, a washing machine had been slowly leaking in one corner of the kitchen, leaving the floor badly rotted under a deceptively-decent looking layer of flooring. What started off as a simple reflooring job, ended up requiring the removal of seven old layers of wood, plywood and waferboard (yes, seven!) from on top of joists that were too rotten to trust any more. And the weeks it took to fix things up properly could have been reduced by at least 30% if Al had two tools that he’s using now. 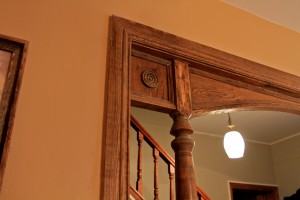 Improving your own home with your own hands is really about investing more of your time and less of your money (or line of credit) to make good things happen. And since big DIY renovations have to fit around the rest of regular life, productivity really matters. In fact, your productivity as a serious fix-up technician is just as important as it is for a pro. This is why I consider a sliding compound mitre saw (also called a chopsaw) an essential item for hard-core DIY work. Too many DIY homeowners struggle without this tool, making renovations more difficult and time consuming than they need to be.

Versions of the chopsaw are made by all power tool companies these days, and they’re useful for everything from trim installation to cutting the kind of massive replacement floor joists that Al was wrestling with. The DEWALT model he’s using now snaps onto a portable base that does two things. Besides raising the saw and making it easier to use without bending over, adjustable support wings hold long pieces of wood level with the saw for accurate cuts. It’s easy to like. 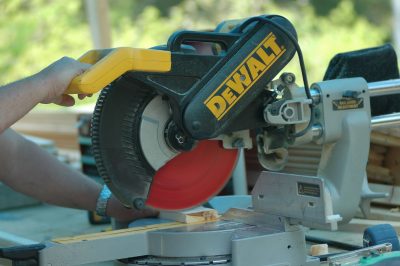 The main beauty of the sliding compound design is that this tool can crosscut planks as wide as they come from the mill, and it does this quickly and with amazing accuracy. Even 2x12s are no problem. You can also cut lumber at any angle between 0º and more then 45º in both horizontal and vertical orientations in the same pass.

Cutting wood is part of every renovation, but putting pieces together is just as important. This is where one specific, yet under-appreciated screw driving tool offers an amazing boost for serious DIYers.

Very effective wood screws have become much cheaper over the last few decades, and this is why they’re now a mainstay of home renovations. Nails still make sense in some situations, but wood screws are easier to drive in close quarters. They also draw pieces of wood together tightly in ways that nails can’t match. The only issue with screws is driving them reliably. If you use a regular cordless drill for this work, it’s not unusual for the screwdriver tip to slip and spin within the recess in the screw head, rounding the square hole and making it impossible to drive the screw either in or out. It’s frustrating and it’s one reason why something called an impact driver was invented. 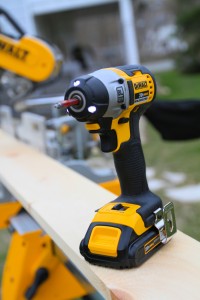 First popular in Japan, these drill-like cordless tools keep screwdriver tips firmly engaged with the screw head in a way that makes all the difference. Instead of ordinary rotation, an impact driver spins and stops spinning the bit many times each second, resetting the driver tip back into the screw head so it rarely slips. Impact drivers also deliver more power for a given motor size than an equivalent drill. The only drawback is noise. The impact drive mechanism is pretty loud as it operates, and that’s why I always wear hearing protection when driving more than a few screws indoors.

The impact driver that Al is using these days has a brushless motor, and this is something you’ll see more and more often. Traditionally, the internal workings of cordless tool motors included small blocks of carbon called “brushes”. These rub against revolving internal motor parts, delivering electricity to them as they spin. Brushless motors, by contrast, eliminate wear-prone carbon brushes all together, while also delivering more work for a given amount of battery energy. 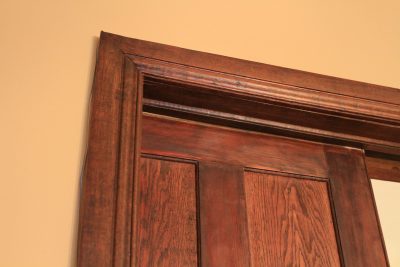 Al and Denise aren’t professional builders, but they do show old-fashioned virtues like hard work, resourcefulness and the ability to live with less while creating real gain for themselves. Working on their own, or occasionally with friends, they’ve put on a new metal roof, replaced all plumbing pipes, rewired all electrical circuits, gutted the livingroom and installed insulation and new drywall, then stripped paint off hundreds of feet of quartersawn oak trim. A woodstove they installed a couple of years ago reduces their $5000 annual heating oil bill to less than $1000 each year.

A couple of mortgage payments on a “perfect house” buys enough great tools to deliver years of low-cost, high-value, efficient renovations that save enough money to create a pretty good hourly rate for yourself as you fix up an older place and keep debt to a minimum. Just add a little bit of old fashioned hard work, and good things happen.